Everything About Fiction You Never Wanted to Know.
(Redirected from Super Mario Bros)
Jump to navigation Jump to search 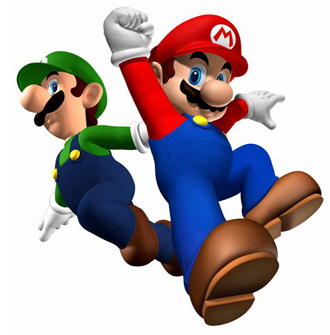 Undoubtedly the most recognizable video game franchise of all time, and centerpiece of Nintendo's gaming empire. It was created by Shigeru Miyamoto, and popularized the Platform Game.

The story of the Mario Brothers begins not in their own game, but in Donkey Kong. In that game, a carpenter (curiously named Jumpman) was charged to rescue the beautiful Pauline from a rampaging ape.

The sequel, Donkey Kong Jr., recast the carpenter, now explicitly named Mario, as the antagonist, from whom the captured Donkey Kong must be rescued. Mario's name and nationality came from the landlord of Minoru Arakawa, the president of Nintendo of America at the time. Said landlord's name was Mario Segale, and he hailed from Italy. Arakawa thought Jumpman looked exactly like him; thus, Jumpman became Mario.

Mario was joined by his brother, Luigi, for their own game, Mario Bros., in which the brothers, having taken up plumbing, fought an infinite number of turtles and other menaces issuing from a number of pipes.

All this led to the game which more or less defined the entire Nintendo product line: Super Mario Bros. The story, which would recur countless times through the franchise, was simple enough: Bowser, a giant fire-breathing turtle dragon ox dinosaur and King of the Koopas, kidnaps Princess Toadstool of the Mushroom Kingdom (who would later revert to her Japanese name, Peach). Mario and Luigi must fight their way through a number of obstacles to face Bowser and rescue the princess. The formula has become codified to the point that the deliberate and highlighted trope subversions in spinoffs have themselves become tropes.

Since then, Mario has become Nintendo's Mascot and their most prolific character, branching out from platformers into racing games, sports titles, Role Playing games, and more. Along the way, he's picked up more friends like his dinosaur buddy Yoshi and Anti-Hero Twin Wario, who along with Luigi and Peach have spun off successful games of their own.

Of course, Mario hasn't completely limited himself to the realm of video games. Mario and Luigi appeared in the Super Mario Bros Super Show, with live-action linking segments featuring the brothers as plumbers in Brooklyn and cartoons that showed them in the world of the games. The secondary Theme Song for the cartoons explains that they "found the secret warp zone while working on the drain" which is how they got to the Mushroom Kingdom from Brooklyn. Interestingly, none of the television show is technically 'canon', inasmuch as the games have that anyway, though it has affected some Fanon. This might be related to the irony that there's never been a show made of it in the country of origin, aside from the obscure theatrical anime The Great Mission to Save Princess Peach. There was also a critically-panned motion picture, where Bob Hoskins and John Leguizamo as the titular brothers faced off against Dennis Hopper as Koopa, a hyperevolved dinosaur from Another Dimension, intent on rejoining his own, mostly desolate world with ours. We were all confused, and the movie's Backstory has never been even obliquely referenced in other media. In addition, Super Mario Bros. 3 was notable for being previewed in the Fred Savage film The Wizard (film), whose climactic scene involved an autistic child playing the first stage of the game.

In addition to the major games, Mario has appeared in dozens of other Nintendo games, including a random appearance as referee in Mike Tyson's Punch-Out!! and as a painting in The Legend of Zelda: A Link to the Past and has appeared on every Nintendo platform (except the Pokémon Mini and Color TV Game), including the ill-fated Virtual Boy (in Mario's Tennis and Mario Clash).

The series has contributed the following games:

Thank you so much for-a reading my page!