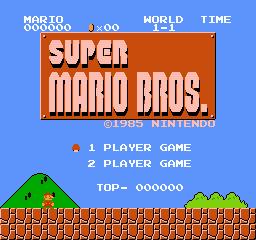 The first game in the Super Mario Bros. series.

After appearing in Donkey Kong and Mario Bros., the Mario brothers moved on to the game that set loads of standards. Not just for platform games, but just about any genre that used conventions established in this game.

Really, the importance of this game can be easy to underestimate by today's standards. There simply weren't games like it. "Golden Age" games were more simple, and had fallen out of favor in the US due to the The Great Video Game Crash of 1983, and games on PCs were more complex, which meant they didn't have the accessibility or mass appeal.

This game hit that sweet spot in the middle. It was simple enough that it could attain mass appeal, yet it also exhibited enough depth to be stimulating for more devoted gamers. Some might dismiss its sales due to being bundled, but it was sold separately in Japan[1], and was still a smash hit. This game helped sell the NES to a game-weary audience, and elevated Nintendo to the top of the gaming companies.

And this of course had loads of sequels and follow-ups in the Super Mario Bros. series, as well as loads of imitators.

The original game was remade with SNES graphics along with the other NES titles in Super Mario All-Stars. There was also a Game Boy Color version called Super Mario Bros. Deluxe. This included a challenge mode where you had to get a high score, collect 5 red coins, and find the Yoshi egg in each stage; a two-player race mode; badges and other images awarded for achievements; a high-score table; extra utilities and printables; a hidden "You vs. Boo" mode (a one-player version of the two-player game); and a hidden conversion of Super Mario Bros.: The Lost Levels.

Nobuo Uematsu has stated that the theme music, originally created by Koji Kondo, should be Japan's national anthem.