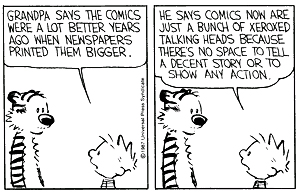 Footage (specifically, close shots) of people ... talking, with little or no other action. Theoretically easy to write and definitely cheap to film, Talking Heads can be boring.

The term was originally coined in the 70s to describe advertisements shot in this style. Talking Heads has since been used as a criticism for media that relied heavily on dialog.

As American Television and Hollywood became more "cerebral" in the early to mid 90s, the media became noticeably more Talking Heady: Complicated police procedural and legal dramas popular at the time relied on interviews and testimonies, while comedy aped the Seinfeld and Pulp Fiction style of rambling, slice-of-life dialog.

Bill Watterson complained that Newspaper Comics are moving in this direction, probably due to a combination of Cerebus Syndrome and Lazy Artists, though he blames restrictions placed on them by newspapers.

Also notable is UK comedy show Peep Show, the entire premise is based around talking heads (because each shot is from the perspective of another person in the scene).

Of course, the actual Talking Heads by Alan Bennett conforms to this trope, essentially monologues (with one phantom policeman). The band Talking Heads (fronted by David Byrne), however, does not. Even their famous concert film, Stop Making Sense, is completely free of Talking Heads, a rarity in a genre typically saturated with them.

Examples of Talking Heads include: