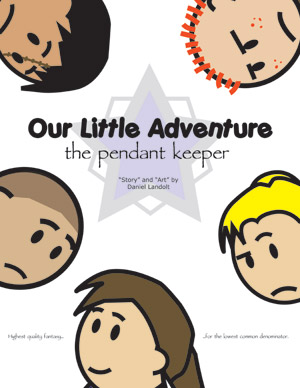 Our Little Adventure is a fantasy webcomic created by Daniel Landolt. It's based on a Dungeons & Dragons campaign set in an original world, using the 3.X edition rules. A young bard named Julie has a dream where she learns she can save the world by finding a pendant which will lead her to the Magicant, a powerful artifact that grants unlimited wishes. She is joined by her fighter husband Lenny on this quest and very shortly after meets her sister Angelika as well as rogue she's travelling with. Using information from "The Palm Tree Ghost" she eventually learns how to use the pendant and goes on a quest to collect the pieces of this Magicant artifact. Of course certain events complicate matters, like an evil spirit Julie accidentally released as well as having to deal with an Evil Empire and followers of a crazy religion.

The comic was inspired by The Order of the Stick's humor and style, but doesn't tell the story with stick figures. The characters are heavily symbolistic in appearance and appear a cross between stick people, paper characters, and Noodle People. The comic doesn't take itself too seriously, heavy with parody and cliché of RPG as well as D&D campaigns. The fourth wall is notoriously weak in spots, and there are some pop culture references here and there.

The comic has been running since Christmas day, 2009 and updated about twice a week on average (including the hiatus). The comic updates every three days, sometimes more often if the creator isn't busy. There are two places the comic can be seen, the first being an official website which has not been updated since 2018, and the second being rogonandi's deviantART account. There is an entry for it on The Webcomic List. It's also got its own group on Facebook where people who like it can get news about it and such, such as updates.

It has a Character Sheet.

Tropes used in Our Little Adventure include:
Retrieved from "https://allthetropes.org/w/index.php?title=Our_Little_Adventure&oldid=1857717"
Categories:
Cookies help us deliver our services. By using our services, you agree to our use of cookies.