Terry and the Pirates 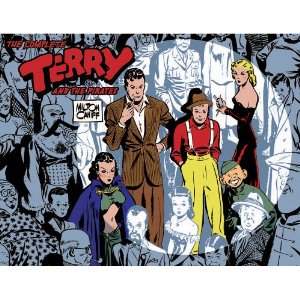 Terry and the Pirates was an action-adventure comic strip created by cartoonist Milton Caniff. The daily strip began October 22, 1934, with the Sunday color pages beginning December 9, 1934. Initially, the storylines of the daily strips and Sunday pages were different, but on August 26, 1936 they merged into a single storyline.

Although Terry and the Pirates had made Caniff famous, the strip was owned by the syndicate, which was not uncommon at the time. Seeking creative control of his own work, Caniff left the strip in 1946, his last Terry strip being published on December 29. After Caniff's departure, Terry and the Pirates was assigned to Associated Press artist George Wunder. Wunder drew highly detailed panels, but some critics, notably Maurice Horn, claimed that it was sometimes difficult to tell one character from another and that his work lacked Caniff's essential humor. Nevertheless, he kept the strip going for 27 years until its discontinuation on February 25, 1973, by which time Terry had become a full-grown man and reached the rank of Colonel.

Most notable of all was the famed femme fatale, the Dragon Lady, who started as an enemy and later, during the war, became an ally. Caniff included a number of non-American women who fought the heroes and had the funny habit of referring to themselves in the third person. These included the Dragon Lady herself and crooks and spies like Sanjak and Rouge. In a rather bold move for a 1940s comic strip, Sanjak was hinted at being a lesbian and cross-dresser with designs on Terry's girlfriend April Kane.

Tropes used in Terry and the Pirates include:

Retrieved from "https://allthetropes.org/w/index.php?title=Terry_and_the_Pirates&oldid=1833150"
Categories:
Cookies help us deliver our services. By using our services, you agree to our use of cookies.