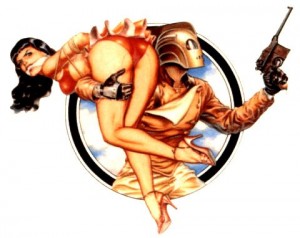 The Rocketeer shows us how he uses his two fists.

Once upon a time, there was pulp. Pulp was a style of writing that emerged onto the scene in the 1920s, featuring a variety of stories printed on cheap paper (hence "pulp"). Back in the day, pulp content ranged from the Cosmic Horror Stories of H.P. Lovecraft to noir pieces to the over-the-top action of Doc Savage to the sword-and-sandals fantasy of Conan the Barbarian. The pulp era died down by the late '50s, when the leading distributor of pulp, the American News Company, went bankrupt.

Then, people started looking back on the pulp era nostalgically, and when they did, they usually locked onto the over-the-top stories of heroes like The Shadow, Doc Savage, and The Phantom. Many point to Raiders of the Lost Ark and the sequel Indiana Jones movies, which took 1930s pulp adventures as an inspiration (along with a Real Life zoologist/paleontologist, Roy Chapman Andrews, who basically did what Indy did but in the Gobi Desert), as the keystone of the pulp resurgence, but whatever kicked it off, pulp has recaptured the heart of many a geek.

Two-Fisted Tales refers to stories told in a style that reflects fondly on the old pulps. This usually means the story will be set in the '20s or '30s, and focus on square-jawed, clever men (and women) of action. Other elements thrown in for flavor include:

As stated above, Two Fisted Tales don't often attempt to recapture the varied feel of all the old pulps; it's very rare you'll see someone trying to overlay the Doc Savage feel onto a Cthulhu story (not that it's impossible). Usually, it attempts to focus on the thrilling heroics, not that that's a bad thing.

Examples of Two-Fisted Tales include:

Retrieved from "https://allthetropes.org/w/index.php?title=Two-Fisted_Tales&oldid=1762734"
Categories:
Cookies help us deliver our services. By using our services, you agree to our use of cookies.