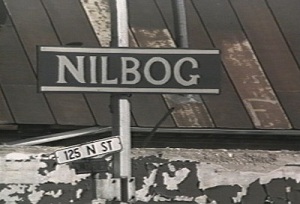 "It's Goblin spelled backwards! This is their kingdom!"

When someone has to think of a pseudonym for themselves, an oddly popular choice is their own name, but written backwards. You'd expect them to be more imaginative, and smart enough to realize that such a pseudonym can easily give away your true identity. Sure enough, most of the time someone notices, often by exclaiming "(Eman Sdrawckab) spelled backwards is (Backwards Name)!"

The technical term for this is an "Ananym". (And yes, it does spell "My Nana" if written backwards). On a technical note, this trope is much more interesting depending on whether it's the sounds or letters that have been reversed, compared with whether it occurs in written or spoken form. For example, compare "Rotiart" (Roh-Tee-Art) to "traitor" (Tray-Tor); the letters are reversed, but the way English language rules work, the result comes out with noticeably different syllabic parsing and verbal rhythm. You might spot the trope in writing, but it sounds like a genuine name when spoken aloud. Conversely, reversing the syllables instead of the spelling can pass in writing, but may sound obvious when spoken out loud.

Also note that some other languages, such as Chinese and Japanese, assign whole syllables to each character, so while the names really were spelled backwards in their native alphabet, their English equivalents got Lost in Translation. This includes palindromes, such as "Maeda Ema" (spelled Ma-e-da-E-ma) and "Yamada Maya" (Ya-ma-da-Ma-ya).

Sometimes, the reversed spelling may be altered to look a little more plausible and/or be easier to pronounce, like "strawckab" instead of "sdrawkcab"—as "st" and "ck" are common digraphs in English, which makes it look more believable as a word.

Compare Steven Ulysses Perhero. Sub-Trope of Significant Anagram. See Alucard for a specific example that is so prevalent as to count as its own trope.

This very trope plays with Everything's Better with Bob.

Examples of Sdrawkcab Name include:

Retrieved from "https://allthetropes.org/w/index.php?title=Sdrawkcab_Name&oldid=1966335"
Categories:
Cookies help us deliver our services. By using our services, you agree to our use of cookies.