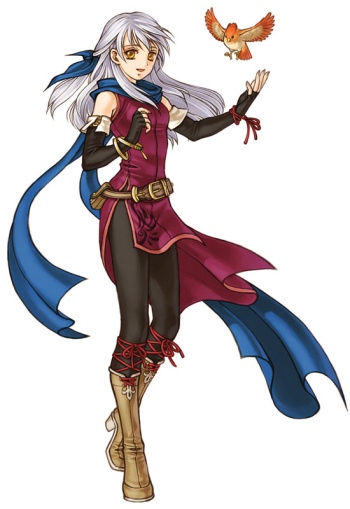 "Sophie! Your hair! It looks just like starlight. It's beautiful!"

In Real Life, white hair indicates either age, bleach, or albinism. Not so in fiction, where white hair can occur naturally on women of any age. For a given value of "natural", that is: white locks tend to mark their owner as special in some way. Maybe her hair is indicative of some spiritual (or outright magical) qualities, or maybe it's a hint of a nonhuman background. At the most mundane, it suggests wisdom beyond her years. It is a common mark of a Mysterious Waif.

Often, this is treated like a variation on blond hair—"platinum blond"—with the character having blue eyes to match. Unless she has red eyes, which would suggest she's an albino. Or she's a Dark-Skinned Blonde, in which case, it's probably a good idea to book it, fast.

The popularity of this trope probably stems from its status as a borderline-natural hair color: white hair on a young person strikes that delicate balance of being unusual but not blatantly unrealistic. The color also lends itself well towards symbolism (purity or death, take your pick).

Her male counterpart, the White-Haired Pretty Boy, is more strongly associated with Japanese media. He lacks the magical connotations and is more likely to be an antagonist or outright evil.

It bears repeating that these are young (or at least young-looking) characters, and their hair color is not indicative of age. For White Haired Pretty Old Ladies (assuming their hair wasn't white When They Were Young), see Grandma, What Massive Hotness You Have!.

Compare and contrast with Hair of Gold.

Note that this trope does exist in real life; a small number of non-albino Asians find their hair turning white during puberty. It's usually hereditary, though stress can also cause a similar effect. Many Northern Europeans also retain their towheaded hair into adulthood.

Examples of White-Haired Pretty Girl include:

Very common in anime and manga, in general: