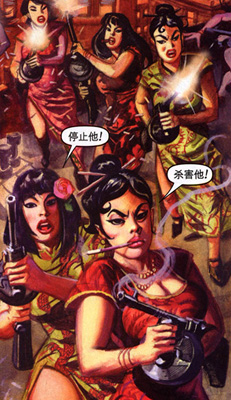 We're pretty much screwed now. And not in that way.

Female variant of the Yellow Peril villain. The Dragon Lady is characterized by her overt sexual and physical aggression, untrustworthiness, and mysteriousness. Probably wears a Qipao or Kimono often with a dragon on it (even if she's not Chinese or Japanese), and knows martial arts. If she carries a weapon, it's usually a concealed stabbing or slashing weapon; folding metal fans are a perennial favorite. Is contractually obligated to have legs that would make Tina Turner jealous, to better pull off the dress.

The Dragon Lady overlaps heavily with The Vamp, the Femme Fatale, and The Baroness, but is set apart by her level of stereotypical Asianness. However, please note that just because a villainess is Asian (especially in non-Asian works) doesn't mean she's automatically a Dragon Lady. Nor is it the same thing for a woman of any background to simply be called "Dragon Lady" just because she's overbearing. This trope has a very specific look and feel.

Examples of Dragon Lady include: