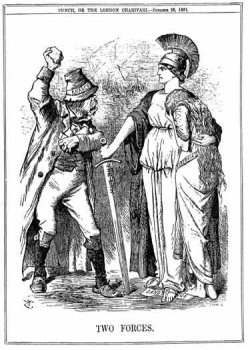 Gladstone spent his declining years trying to guess the answer to the Irish Question; unfortunately, whenever he was getting warm, the Irish secretly changed the Question...
—1066 And All That

Many modern countries were once British protectorates, or administered by Britain as part of her Empire proper. The Republic of Ireland is unique in actually having been an integrated part of the United Kingdom, in the same way Poland was once divided up between and integrated into Prussia, Austria and Russia. Like in Poland, proto-nationalism in Ireland never quite died in spite of this, mostly due to the sentiments of the literate elite who composed the vanguard of nationalism as we know it today in the 18th and 19th centuries.

Depending on how you consider it The Irish Question might cover the whole of Irish-British relations from The Middle Ages to now. Usually, however, it refers to the period between 1801 and 1922 when Ireland was formally a part of the United Kingdom of Great Britain and Ireland (England and Scotland had previously being united into the new Kingdom of Great Britain in 1707, while Wales and its ruling elites having been formally integrated into England and English society from the 16th century). Irish members of parliament sat at Westminster.

Given the nature of the 'United Kingdom,' it's natural to ask why there was not a Cornish Question, or a Welsh Question, or a Scottish Question. The answer is simple, really; these peoples had very little sense of nationalism as we know it today and shared a broad non-Catholic allegiance with each other by the time of the Union of England and Scotland in 1707. Scotland was strongly Calvinist, and England (inc. Wales and Cornwall) was broadly Anglican. Most people in Ireland were, on the other hand, Catholic. This does make one wonder how British and Irish history would have been different had a certain King of England not been so eager for a divorce. As senses of national identity developed many Catholics in Ireland became Irish Nationalists—wanting independence or at least autonomy in running their own local government rather than sitting at Westminster. Scottish Protestant settlers in Ireland formed the core of those people in Ireland who came to identify more with 'Britain' and British nationalism, most of these living in the areas around Ulster. This was deliberate, as they had been sent to settle for this very purpose. Dublin had a long history of English settlement by this time, and was a broadly Anglican area. Over time, the Protestant community in and around Dublin came to integrate more with Irish culture than their Ulster counterparts, whose more stand-offish faith led them along much more firmer religious and eventually nationalist lines.

Broadly, most of those who wished for Irish independence were Catholic, and equally broadly those who supported the union of Ireland with England and Scotland ("unionists") were Protestants. Exceptions abounded.

The situation was soured by an undeniable streak of anti-Irish feeling in Britain.[1] The Irish were despised (and often feared) for their Catholicism, poverty and perceived recourse to violence. The Irish were regularly mocked in British newspapers and magazines, portrayed as shambling grotesque ape-like thugs in political cartoons - see the picture on this page. Even the better-minded Britons tended to view the Irish as being unfit to govern themselves. This view changed over the course of the 19th century, as anti-Irish rancour faded and by the late 1880s had largely died down.

On the Irish side, hostility was worsened by a truly horrific famine in Ireland in the late 1840s, in which over a million people died and many more were forced to emigrate. Many Irish people believed and still do that it was caused by at best stupidity and at worst deliberate malice on the part of the British government, who preferred starvation in Ireland to the chaos in Britain that would result if Ireland stopped exporting food to industrial towns.[2] A policy often pointed to is the Corn Law forbidding Irish farmers from growing this crop and competing with English ones. They then turned to potatoes, which failed, and the famine struck.

Note that, until 1916, most Irish nationalists were not republican; most envisaged even a mostly independent Ireland being ruled by the House of Saxe-Coburg and Gotha and Canada was often cited as a model for Ireland. Both Queen Victoria and Edward VII were popular and received enthusiastic welcomes on visits to Ireland. Indeed, Victoria had a particular personal fondness for Ireland, often holidaying in Kerry. The full break only came later on when things had gotten worse.

There were many political attempts to reconcile Ireland into a Home Rule arrangement that would (like the current devolution of Scotland and Wales) keep Ireland in the UK. The first attempt was shot down. The second attempt passed through the House of Commons but did not make it through the House of Lords. Finally, the third attempt passed through both Houses and even received Royal Assent, but its implementation was delayed by the onset of World War I. In 1916, during the war, there was a minor Irish uprising on Easter Monday in Dublin which was crushed by the British. Initially this received a negative response from the Irish populace, ranging from bewilderment to outright contempt, especially as it was viewed as a betrayal of Irish soldiers fighting in the war. However, horror at the brutal treatment of captured rebels and a Draconian policy of repression by the British, the revival of Gaelic culture, and general war-wariness increased the feeling of revolutionary nationalism and support for independence. This was dramatically exacerbated in 1918 when the possibility of extending the 1916 Conscription Act to Ireland was considered by the British government, resulting in national uproar and staunch opposition from both Unionists and Nationalists. After this the Irish Parliamentary Party (moderate nationalists who supported Home Rule) fell and was replaced by Sinn Fein as the main political force in Ireland. Bitterness increased on both sides, leading to the Anglo-Irish War and finally the Irish Free State leaving the UK under the terms of the Anglo-Irish Treaty of 1921, while the (mostly Protestant) Northern Ireland remained. (Some republican nationalists disagreed with the terms of the Treaty, and there was a brief and bitter civil war which still informs Irish politics to this day. The Civil War is the Elephant in the Living Room in Irish culture, and doesn't get mentioned much for fear of causing offence; notable exceptions are Sean O'Casey's play Juno and the Paycock and the recent Ken Loach Film The Wind That Shakes the Barley.) The Irish Free State eventually went on to become the Republic of Ireland by unilateral declaration in 1949 (but they didn't change the license plates until 1987). For Northern Ireland see The Troubles.

This area of history has a lot of disagreement; suffice to say everyone has his or her own view on the subject.

The conventional moderate view is that the British should try and remember history more (an amazing number of Britons seem to think Britain had no input on Irish history at all and that the Irish are just 'like that'), and the Irish should try and forget more (an equally amazing number of Irish people will blame Irish problems on the British regardless of where the actual cause or fault may lie, and in certain places there are people still holding grievances dating back centuries).

On a final note, one should point out that, in the end, the British and the Irish are Not So Different. This is especially true now that secularization has largely rendered the sectarian differences that have been traditionally the biggest source of tension between them a moot point.

Do not confuse with the 'Jewish Question'