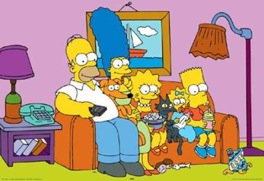 The Simpsons first aired from 1987 to 1989 as a series of animated shorts on The Tracey Ullman Show. Unofficially known as "Season 0," the original 48 ad-bumpers kicked off what is now well established as one of television's all-time classic series (which premiered on the then-fledgling FOX network in December 1989). In 2020, it aired its thirty-second season, making it the longest-running prime-time sitcom in the world (surpassing the previous record of 31 seasons held by Last of the Summer Wine).

Depicting the animated adventures of the upper-lower-middle class Simpson family, the show started as a parody of Dom Com conventions, but quickly incorporated elements of social satire, pop-culture references, and a mix of highbrow and lowbrow humor that has kept it popular year after year. Originally the show focused most of its attention on 10 year old Bart Simpson, but after the first 3 seasons his dad Homer gradually took on being the most consistent protagonist.

One reason for the show's longevity is the massive cast of over 100 recurring characters it has built up over time, allowing the writers to work with a rich variety of relationships and milieus. Another thing that has established The Simpsons as being unique is an absolute refusal to acknowledge the passing of time. Bart has remained 10 years old and in general the show employs an active Negative Continuity, sometimes even acknowledged in the show.

Roughly from about Seasons 2 - 9, The Simpsons was considered one of the most consistently funny TV Shows ever produced. However, it is generally considered that at some point after that, the series declined in quality. Exactly when it declined, and by how much, is difficult to find a consensus on, but viewership has decreased over the recent seasons. Its numbers remain strong though, and the merchandising juggernaut shows no signs of stopping. Fox announced that it is considering setting up a separate Simpsons/spin-off network. (It's called FXX!)

A feature film (creatively titled The Simpsons Movie) was released in summer 2007. Perhaps not surprisingly, reactions from fans were mixed, with some fans claiming it to be on the level of the Golden Age episodes, and some considering it just an extra long Tarnished Age episode. Nevertheless, the film was a huge financial success and recieved a positive response from critics, earning a 89% Fresh Rating on Rotten Tomatoes and getting a 80 on Metacritic.

Many of the people behind the show are also responsible for Futurama (and while Futurama certainly takes some comedic cues from this show, it is a far cry from a Simpsons clone).

Matt Groening has said he created the core family members in The Tracey Ullman Show's production office waiting room after realizing he didn't want to sign the rights to his Life in Hell characters over to Rupert Murdoch.

In 2009 the show began its 21st season, officially dethroning Gunsmoke as the longest running prime-time American television series of all time (although Sesame Street, among others, still retains an even longer run with 40 seasons).

In addition to the videogames with their own pages linked below, The Simpsons have featured in other fairly mediocre games including:

Check out this character sheet for more info on FOX's "first family" of animation. Also has a work-in-progress Recap page here.

The Simpsons (animation) is the Trope Namer for:

A whole bunch of tropes - so many that they're listed on their own page.

Tropes used in The Simpsons (animation) include:
Retrieved from "https://allthetropes.org/w/index.php?title=The_Simpsons_(animation)&oldid=1928878"
Categories:
Cookies help us deliver our services. By using our services, you agree to our use of cookies.