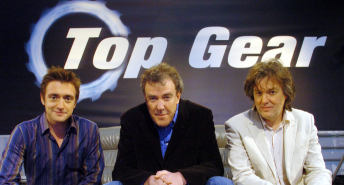 Top Gear was an award winning (BAFTA/Emmy) BBC magazine series about automobiles and motoring. It started in 1977 as a fairly conventional auto show, but after being revamped in 2002 (following a one-year cancellation in 2001-2) it took a turn to become more overtly humorous. The show was very popular, with an audience estimated at about 8 million per week on the BBC and around 350 million worldwide.

(It has nothing to do with the driving game series on the SNES...and there was enough confusion about this, that the BBC did indeed sue the publishers of that game. The BBC indeed hold copyright to the title several times over: the original use of the show name was way back in 1967, with the birth of Radio One, where leftfield DJ John Peel, presented his Top Gear With John Peel show, showcasing the very best in avant-garde music, with comedy interludes from the sort of people who later became Monty Python and the Bonzo-Dog Band)

The main presenters were

The show's appeal, which extends far beyond driving enthusiasts or even car-owners, was the interplay of the three presenters and what May referred to in an interview as "self-indulgent cocking-about." In addition to doing more conventional car test drives and reviews, it had undertaken a number of segments which feature unique premises.

The show ended in 2015 when Clarkson punched a production assistant in a racially heated argument over an inability to get food, with Hammond and May departing soon afterwards. The BBC announced it would replace the series with a similarly titled and themed show starring Chris Evans named Top Gear. Meanwhile the trio have signed on to produce a similarly themed show (but with a far bigger budget) for Amazon titled The Grand Tour.

For more detailed examples of what cocking-about one might actually see, please check the Segments page.

The Australian version, obviously named Top Gear Australia had Warren Brown (replaced by Shane Jacobson for after second season), Charlie Cox (replaced by James Morrison for the second season, and then Ewen Page for the third and fourth) and Steve Pizzati bringing their own brand of entertainment to the normal Top Gear format... The first episode alone had Warren using a small car as Great White Shark bait. And let's not get started on the other crazy things they've done. The Pizzati/Page/Jacobson team appeared in an episode of the original British show, but Top Gear Australia was canceled in September 2011.

There is also an American version which now has its own page.

The show also has an official, legal and above-board YouTube channel with abridged versions of various segments.

Tropes used in Top Gear include:

This show is so Troperiffic and currently nearing being Trope Overdosed, we've had to split the description into multiple pages:

Retrieved from "https://allthetropes.org/w/index.php?title=Top_Gear&oldid=1831935"
Categories:
Cookies help us deliver our services. By using our services, you agree to our use of cookies.