Everything About Fiction You Never Wanted to Know.
Jump to navigation Jump to search
/wiki/David Tennantcreator 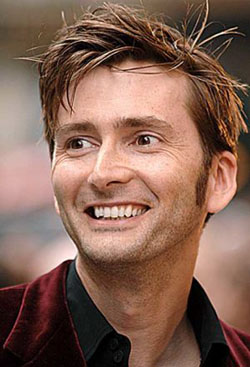 A Lothian-born bloke, David Tennant was born David MacDonald, but had to adopt a screen name for guild reasons (the "Tennant" coming from the last name of Neil Tennant of Pet Shop Boys). Best known for being The Tenth Doctor, as well as the lead role in a Casanova miniseries. In Harry Potter and the Goblet of Fire, his character is played by Brendan Gleeson for most of the movie, but Tennant does get a few scenes to display his..."eager" face (his face is wonderfully expressive, as you can see in any of his TV or film work). Played "Dangerous Beans" in a BBC radio adaptation of the Discworld novel The Amazing Maurice And His Educated Rodents. Did manage to get a role as a very convincing pre-op transsexual on Rab C. Nesbitt. Has auditioned 14 times for Taggart and failed each time.

In 2008, he played the eponymous character in the Great Performances production of Hamlet from the Royal Shakespeare Company alongside Patrick Stewart. The film adaptation can be viewed on PBS' website. In 2011, he played Benedick opposite Catherine Tate in a production of Much Ado About Nothing.

Tennant is also a Promoted Fanboy. A Doctor Who fan since childhood, he specifically went into acting to play the Doctor (in a strange case of irony, his first big role was in something called Takin Over the Asylum) and has shown himself to be quite knowledgeable about the history of the series in interviews. His Doctor is now rated among the top two of the eleven canon Doctors and he is now regularly winning "Best Doctor" polls.

Contrary to an infamous question on The Million-Pound Drop, he's not the longest-running Doctor. Hell, he doesn't even crack the top three.

He left Who after the 2009 specials. When he initially announced his departure at the National Television Awards, the fangirl (and fanboy) screams shattered glass fifty miles away.

He's married to Georgia Moffett (and has a child with her, Olive), who not only played his Opposite Gender Clone in "The Doctor's Daughter" but is also ex-Doctor Peter Davison's real-life daughter. (And guess who one of Tennant's favorite Doctors is? Right in one. David Tennant is now the ultimate Promoted Fanboy.) Sorry, ladies (and gentlemen).

Tennant is also the current host for Masterpiece Contemporary.

He was hard to avoid on The BBC on Christmas 2009 - he was even in the Station Idents! Which also was repeated concurrently on BBC America.

He is a public supporter of the Labour Party, delivering a very scathing criticism of David Cameron in early 2010 as well as providing the voiceover for Labour's 2010 Election Broadcast, although he avoided political commentary during his tenure as the Doctor because he felt it was improper. In 2011, he played showy vampire slayer Peter Vincent in the Fright Night remake.

He likes Kate Bush, Coldplay, Come Dine With Me, Firefly, and Honey Nut Shredded Wheat. Deal with it.

David Tennant provides examples of the following tropes:
Retrieved from "https://allthetropes.org/w/index.php?title=David_Tennant&oldid=1803280"
Categories:
Cookies help us deliver our services. By using our services, you agree to our use of cookies.