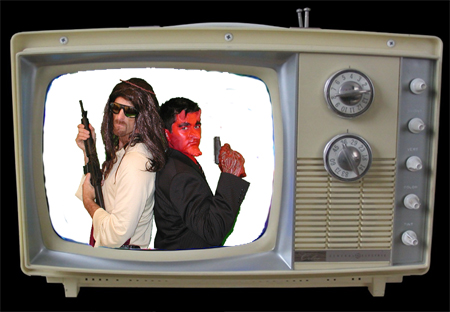 He's the Son of God, here to save us. He's the Devil himself. Together, They Fight Crime!

Two very different characters are obliged to work together to solve a crime. The premise is very often, but not always, expressed in Trailers and pitches as "He's an X. She's a Y. Together, they fight crime!" So much that it's almost become a Stock Phrase. Expect lots of cultural clash humor arising both from different policing traditions and from general personal differences between the two characters. Sometimes the ante will be raised by making the crime-fighters from two groups that are actively antagonistic.

Can be the premise of a Buddy Cop Show, although then there usually needs to be some reason for the other cop to continue hanging around beyond the pilot.

They Fight Crime must use both Wunza Plot and Odd Couple. Please do not add teams of more than two characters, or single characters, no matter how quirky they are.

Examples of They Fight Crime include:

Retrieved from "https://allthetropes.org/w/index.php?title=They_Fight_Crime&oldid=1956692"
Categories:
Cookies help us deliver our services. By using our services, you agree to our use of cookies.