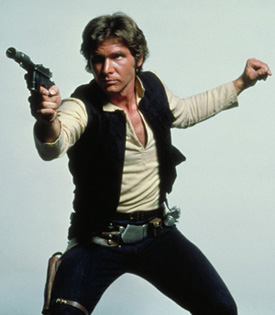 The lieutenant and Foil for The Hero.

The Lancer is usually easier to intuit in older works, but in a more complex Five-Man Band Lancer's three main traits, (being Number Two to The Leader, Foil to The Hero or Foil to the Team) may be divided amongst several members instead of combined into one character.

For example, in the event that The Lancer is a foil:

This is the member of the Five-Man Band who is most likely to not be a team player. He's the one who sneaks off on his own to advance the team's goals independently. He might be jealous of the leader, with an attitude of "Why can't I be the Leader?" When he does finally get his chance though, to his chagrin he may well find himself asking himself, "Now what would The Hero do?"

If The Complainer Is Always Wrong and there's a chronic complainer to act as the show's Butt Monkey, it's likely this guy. He's also the one most likely on the team to go Turncoat, and the last one The Hero will suspect. Conversely, if the rest of the Band members turn their backs on The Hero for some reason, the Lancer may be the only one who sticks by his side. The Hero and The Lancer may also be rivals for a love interest, or one of them will have a cute sister whom the other crushes on, only to have the brother say "My Sister Is Off-Limits!"

In the event that The Hero of the team is unable to lead, or the team temporarily has no Hero, The Lancer steps in. Sometimes, he's forced to take the position against his will. Either way, this plot is used to contrast the hero's leadership style against what the lancer's would be. A frequent ending for this plot is for The Lancer to gladly give up the reins of power while The Hero often notes that the team will be in excellent hands the next time he is absent.

Powers and skills common to The Lancer include:

When worst comes to worst, The Lancer is the one person on the team who is likely to die for the cause. He's also the most likely member of the team to pull a Face Heel Turn and get turned to The Dark Side (though this usually doesn't last), or end up Brainwashed and Crazy by the Big Bad or the Evil Genius (and if this happens, either The Chick or The Hero will talk him out of it).

It's becoming more and more common for this character to be female, either merged with, or contrasted with, The Chick. Having The Lancer be the other side to The Hero's coin is also fairly common. Having the character who is both most like and most unlike The Hero also being the strongest woman can create UST. If not multi-classed with The Chick, she may be in a Love Triangle, acting as the Veronica to The Chick's Betty in pursuit of the object of her secret desire, The Hero. A female Lancer and The Chick may develop into an Odd Couple, and even begin to work as a sub-team. A former Dark Magical Girl often becomes The Lancer after her Heel Face Turn.

This Trope is named for the man-at-arms of The Middle Ages, the term for a professional soldier. While the term also encompasses the members of the knightly class, a man-at-arms was not necessarily a knight. They were also men of lesser financial and social status than knights, but were equally trained and equipped to fight on horseback in full armour and with sword and lance, just like their social superiors. In this regard, he is most recognizable as King Arthur's right-hand man, Lancelot (portrayed as a better fighter than even the king in most versions of the myth).

Examples of The Lancer include:

They get extra bonuses in the manga, with Foil elements like the fact that, even though they look the same age, Vash is Really Nearly Two Hundred and Wolfwood has accelerated aging from the experiments the Eye of Michael did on him, and based on his former orphanage-mates can't possibly be even eighteen. Also, he joined up with Vash because the Big Bad told him to.

Retrieved from "https://allthetropes.org/w/index.php?title=The_Lancer&oldid=1947407"
Categories:
Cookies help us deliver our services. By using our services, you agree to our use of cookies.