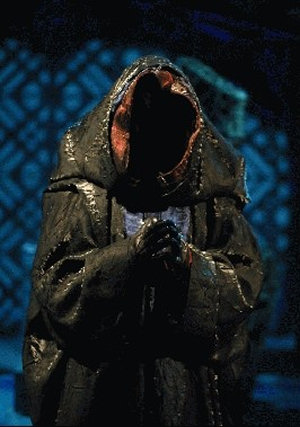 There's a reason Anubis doesn't let you see his face. He doesn't have one.

A variant of He Who Must Not Be Seen. The audience never gets a good look at this character's face. Specific variants include:

There are several reasons for writing a faceless character, depending on their role in the plot. For a recurring character, hiding their face lends an air of ambiguity to the character and their motives. If said character is a villain, often of the Diabolical Mastermind variety, this additionally serves to make them seem more threatening.

Occasionally, the recurring faceless character will be revealed in an especially poignant scene, typically just before the series (or the character's tenure on it) ends. Villainous characters tend to be hideously disfigured when their masks are removed, though the subversion has become just about as common, where the villain is revealed to be a perfectly ordinary guy. The faceless villain could also be a Mole in the good guys' team the audience doesn't know about yet.

Non-recurring faceless characters tend to be either Cannon Fodder Faceless Goons (whose facelessness removes their individuality, their humanity, and -- hopefully—the audience's squeamishness about their deaths), or an Invisible President (whose face is hidden to prevent the episode from being dated by the next election).

May involve being Never Bareheaded. For other parts of the body, see Scenery Censor. If you don't see anything at all from a villain, watch your step; you're up against an Ultimate Evil. For literally faceless characters see The Blank. Scary Shiny Glasses is related. The hidden-by-shadow version combined with Chekhov's Gunman results in Sinister Silhouettes. If a character never appears at all, they're The Ghost.

The mask-wearing kind of The Faceless often end with The Reveal. Sometimes this is a big anticlimax.

Examples of The Faceless include:

In the film adaptation (so goes the story), various prettyboy types were considered for the role of V, but they all wanted to do at least one scene unmasked. Hugo Weaving was therefore enlisted instead and his mask is never removed. The "mystery factor" is diminished since Weaving looks pretty much the same in every movie, but what was lost there is regained in spades in the voice and physical acting. He does get a cameo in that he's one of the prominent faces (along with the others are characters who have died in the course of the film) in the crowd removing their masks at the end. It's rather poignant.

Retrieved from "https://allthetropes.org/w/index.php?title=The_Faceless&oldid=1895860"
Categories:
Cookies help us deliver our services. By using our services, you agree to our use of cookies.