Everything About Fiction You Never Wanted to Know.
(Redirected from Useful Notes/Spain)
Jump to navigation Jump to search 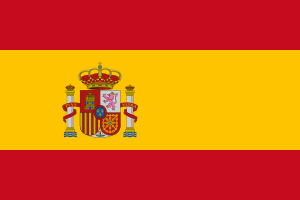 The Spanish flag, often seen with a coat of arms on it (centre-left).

Spaniards speak slightly differently to the inhabitants of their former colonies. They insist on the use of the form "vosotros" as the second person plural, speak with a huge lisp, and are somewhat more liberal in the use of vulgar words in both television and Real Life. The latter can be seen as the legacy of the phenomenon known as "El Destape", when after the death of dictator Francisco Franco in 1975 a wave of Fan Service and crude language spread everywhere in response to almost four decades of wholesome values imposed with an iron fist.

For some reason, the most popular form of Entertainment in both print and audiovisual media includes anything related with gossip on celebrities. The Spain definition of "celebrity" includes not only artists and models, but also include major and minor members of aristocracy, and the kind of people who in America would be the "C-list" (which is also the case in the United Kingdom). How there isn't an equivalent of E! yet is a mystery.

Spain has a monarch, Juan Carlos I, who surprised everybody by not continuing Francisco Franco's Fascist regime after Franco's death in 1975. Instead, he more or less said "go have yourselves a democracy; once you've finished writing your constitution, I'll become just a figurehead and will spend the rest of my natural life being a nice guy." He is generally very popular in Spain, partially due to his personal intervention in ending a rather comical attempted military coup in 1981 and more recently verbally slapping down Hugo Chávez. The Spanish monarchy is also notable in that it's the only throne still held by the House of Bourbon (La Casa de Borbón), which formerly ruled over France as well.

Flamenco and bullfighting are not as big as movies done outside the country (and even some made by Spaniards) make you believe. Indeed, Flamenco is mainly a regional thing and other areas have their own traditional dances, like the Jota, the Sardana or the Muñeira. Of course, while Flamenco originated and is stronger in the Southern region of Andalusia, it is enjoyed in many forms throughout the country (Take, for example, Barcelona. While Spaniards seem to think that Catalans hate flamenco, Barcelona has a lot of the oldest tablaos in Spain and it's the birthplace of world-wide known artists like "el Pescailla" or Carmen Amaya) just not as much as foreigners may think. On the subject of bullfighting, well, let's just say that it has been banned in two Autonomies (Catalonia and the Canary Islands).

Here are some examples of Galician music and dance.

Politically, a member of NATO and the European Union.

Spain is actually an extremely diverse country with four official languages and a variety of strong regional identities that run the spectrum from simple feelings of difference from other regions (Aragón or León, for example) to full-on separatismo (many Basques and some Catalans). A note on the language's name: "Spanish" is the official name of the language according to the RAE (the Real Academia Española or the Royal Spanish Academy, the highest linguistic authority in Spain), but with some people you have to call it "Castilian", lest you accidentally trigger a lecture on centuries of Castilian imperialism and oppression from a proud Catalan or Basque. On the other hand, you should be OK calling it "Spanish" in Madrid or pretty much anywhere else it's been the native language for a long time.

Spanish politics can only be understood as a combination of both a conventional left-right axis and a second regionalist-centralist one. As a reaction to chauvinistic Francoist centralism and imperialist and downright asinine attempts to impose Castilian-ness on the entire national territory, Spain now has an extremely devolved and decentralised structure. The 52 provincias are grouped into 17 comunidades autonomas with varying levels of power. The system has been described as de facto federal in nature. It's also an expensive bureaucratic nightmare, really--Spaniards live under four levels of government, 5 if you count the EU.

The "historic nationalities" of Catalonia, the Basque Country and Galicia have the greatest degree of autonomy whilst other areas lag behind. Andalusia got a grade of autonomy really similar to that of Catalonia through a really complex system that didn't prevent its implementation.

While everyone knows that Spain has an anthem (with no lyrics), each comunidad autónoma also has its own , here are a few:

Franco came to power via the Spanish Civil War (1936-1939, just prior to World War II), a war between the democratically elected left-wing government (Republicans) and right-wing rebels (Nationalists). About 500,000 people were killed.

This war massively worked up the intelligentsia of Europe, who saw it as a clash of ideologies. It was very much a proxy war, with Soviet and Nazi troops fighting covertly as "volunteers". Both sides used the war to test out tactics and military technology. The non-intervention of the Western democracies, compared to the heavy involvement of the Nazis and Italian fascists on the rebel side, was a significant factor in the downfall of the Republic, as well as its ever-increasing dominance by the previously weak Communists as the war progressed, since they controlled access to Soviet military aid.

The Nazis and Italian fascists tested their carpet bombing techniques--on civilians. One of the first cases--in fact the most infamous case--was on 26 April 1937, where German and Italian aircraft devastated a town in the Basque Country, killing probably several hundred people. This town's name in Spanish became a by-word for the horrors of war and was immortalised in a Picasso painting. Its name: Gernika, also known as Guernica.

About 30,000 volunteers fought, mostly on the Republican side; the one you're most likely to have heard of is George Orwell. Ernest Hemingway also showed up, but contrary to popular belief he did not take up arms: he was officially there as a war reporter, although he might unofficially have been a spy for the Republicans.

There were a considerable number of atrocities on both sides. The rebel "Nationalists" maintained a policy of repression and executions of alleged leftists (Federico Garcia Lorca, for example), Democrats, and Catalan and Basque nationalists in each town or city that was occupied during the war. When they won the war, more rounds of purges and repression took place over all the country. On the Republican side, just after the outbreak of war various anarchist groups armed themselves and took effective control of many zones within Republican territory, and the same happened with some Communist groups. Mainly in the first months of the war, before the Republican government could regain control and establish some order over its own territory, those rogue groups carried out a political cleansing of their own, killing alleged conservatives and fascists, land and industry owners, and Church staff.

Media-wise, not counting Guernica, the war is the setting of For Whom the Bell Tolls and Pan's Labyrinth. Indiana Jones was involved too.

In terms of wildlife, Spain is home to the rarest cat in the world, the Iberian lynx, with a mere 280 individuals. Since the rabbit is also native to Spain, the lynx had a diet of around 85% rabbits. The release of myxomatosis into neighbouring France, and its spread into Spain, very nearly caused the lynx, along with the Spanish Imperial Eagle, to go extinct, but they are now recovering quite nicely.

Retrieved from "https://allthetropes.org/w/index.php?title=Spain&oldid=1154744"
Categories:
Cookies help us deliver our services. By using our services, you agree to our use of cookies.