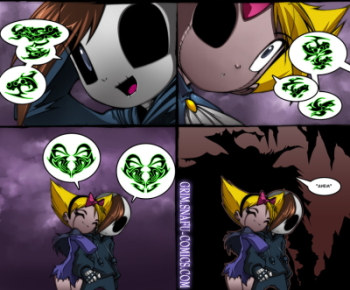 Oh, hey, the aliens wish to communicate with us. They're speaking into the communication apparatus now...

Much as Starfish Aliens is the polar opposite of Human Aliens, Starfish Language is the diametric of Aliens Speaking English. Whether the Translator Microbes are on the fritz or the aliens in question are communicating with Minovsky Particles, it's unintelligible to the humans, especially to the viewers (unless there are subtitles, often only present when the trope is played for comedic effect). If it's a video game, expect there to be a few branches on the Tech Tree devoted to understanding the language and eventually the aliens' culture and intent, whether it be peace, cable, cattle, the opposite sex, or just to put a cosmic smear where your Insignificant Little Blue Planet used to be.

May result in The Unpronounceable.

Contrast with Strange Syntax Speaker, where the words are understood but the language rules are not. For when the language's grammar is very similar to Indo-European languages, see Indo-European Alien Language, or, if the language has basically a one-on-one correspondence with a real world language, Relex.

First Contact Math is one method of ascertaining the intelligence of Starfish Language speakers.

No real life examples, please; the whole point of the trope is that the language does not resemble anything that we humans use to communicate. Also, it's more than a little alienating.

Examples of Starfish Language include:

Retrieved from "https://allthetropes.org/w/index.php?title=Starfish_Language&oldid=1876795"
Categories:
Cookies help us deliver our services. By using our services, you agree to our use of cookies.