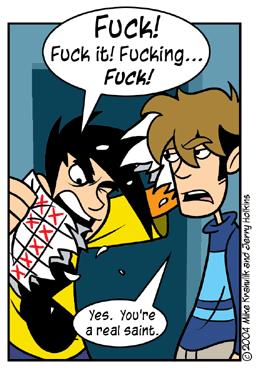 If you were to read the previous few frames, you'd know that this is The Scottish Trope being violated.

Sometimes people swear a lot. Media aimed at a general audience sprinkles on the swearing, sometimes leaving it out or saving it for when it counts. Media aimed at mature audiences sometimes dumps it on with a big fucking ladle: lots and lots of F-bombs.

Some writers think the media is oversanitized and does not reflect how people speak in Real Life, particularly how they swear. Heavy usage of swearing is seen to be more realistic or 'gritty'. This sentiment is stronger in certain settings, such as urban life, gangs, online gaming, and the military, etc. There is some truth to this, as there is more swearing in real life than any prime time TV show would lead you to believe.

On the other hand, writers can go overboard on swearwords to the point you can't take the characters spouting them seriously. This is particularly noticeable in works that try too hard to be Darker and Edgier but come across as childish instead. When there's already gratuitous Gorn and sex all over, using Obligatory Swearing to make the characters talk like 10-year-olds out of adult earshot seems par for the course. Another possible backfire is when it's used in Historical Fiction, if "Gosh Dang It to Heck" really was the height of profanity back then. This could be a liberty taken by modern writers to drive home the fact that a character is fucking foul-mouthed, but it messes up the immersion if the viewers know better. And then there are the works that sprinkle in a few extra expletives just to Avoid the Fucking 'G' Rating and its unfortunate association with largely Disnified preschool-level pablum.

Often, this is used as a Comedy Trope, where a character's usage of a long string of curse words is the joke itself. This often occurs in dark comedies. When movies or shows re-air in syndication, where they often cannot use the amount or severity of swears as they did on their original airing, the curses are often redubbed or bleeped out, to sometimes amusing results, like "Do you see what happens when you find a stranger in the Alps?

This trope is named after a combination of the terms cluster bombs and F-bomb, another term for "fuck." Compare with Refuge in Vulgarity, Precision F-Strike, Atomic F-Bomb, and Angrish; also see Obligatory Swearing, which sometimes takes the form of Cluster F Bomb. Contrast with Foreign Cuss Word, Pardon My Klingon, and especially Gosh Dang It to Heck. For more examples, see The Other Wiki. A RantInducingSlight sometimes triggers one of these. A character who drops these while the other characters use more subdued language is a Sir Swearsalot.

If you're looking for that one other word, see Country Matters.

Due to the nature of this trope, the following examples will most likely contain fucking swearing. Don't be a fucking Bluenose, bitch.

Examples of Cluster F-Bombs are listed on these subpages:

Retrieved from "https://allthetropes.org/w/index.php?title=Cluster_F-Bomb&oldid=1959353"
Categories:
Cookies help us deliver our services. By using our services, you agree to our use of cookies.