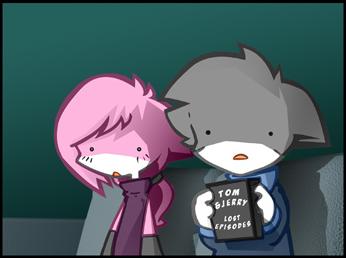 They pulled it off! A legitimate Twist Ending!

When advertisements tease you with words such as "The most shocking episode of the season!", they're probably referring to this (unless they're not). This is the episode meant to radically alter the status quo, and in doing so send a major shock through the viewership.

Note that it's not a Wham! Episode if it turns out that the shocking events were All Just a Dream, or if the changes are reversed with a Snap Back or Reset Button, or if the series has Negative Continuity. To count as a Wham Episode, the events must actually happen, and become Canon. When a series is already successful, and the writers decide to do this, it's very risky. The writers are making a bold move and risking losing a lot of their fans. The writers have balls. You might even say they have canon balls.

The term was coined by J. Michael Straczynski, creator of Babylon 5, which is very liberally sprinkled with them.

Almost always takes place at a Season Finale, and at times can even be a Grand Finale if it includes a high enough shock factor (which isn't always the case).

Compare Genre Turning Point and Nothing Is the Same Anymore. Contrast with Breather Episode. Related to Drama Bomb. Complete opposite of Status Quo Is God. If the Wham! aspect is concentrated in a single line, it's a Wham! Line. See also Ascended Fridge Horror, wherein some aspects of the series leave some viewers with reason to expect a tone shift, before they see it applied by the writers. If the Wham! Episode happens to be the finale of the series, you may discover that The Ending Changes Everything.

Not to be confused with Bizarro Episode. Or with the band Wham! Or with the Rochester, New York broadcast station WHAM.

Here be unmarked spoilers. Proceed at your own risk.

Examples of Wham! Episode are listed on these subpages:

Retrieved from "https://allthetropes.org/w/index.php?title=Wham!_Episode&oldid=1790819"
Categories:
Cookies help us deliver our services. By using our services, you agree to our use of cookies.