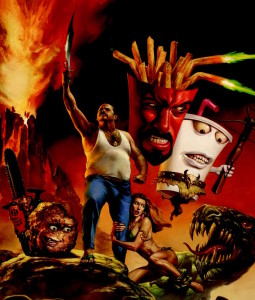 The actual movie is animated in Flash.

If Covers Always Lie, trailers can, too. Sometimes Tonight Someone Dies or hyping The Reveal might not be enough. And with the Internet an open window these days for writers and directors to viewers' likes, dislikes, hopes, predictions, and Shipping loyalties, it's easy to know exactly how to bait fans into watching the next episode. Be careful not to believe everything you see, though, because as all Fan Vid makers know, any scene can be mixed-and-matched with another to look completely different from their real context. In the worst examples, it'll actually drive away those who would have otherwise enjoyed it, by completely confusing the relevant demographic.

Indeed, the creation of fake trailers to make a movie look like it's from a completely different genre has become one of the Internet's most beloved recent art forms, such as The Shining as a family-oriented romantic comedy, the one that started it all, or Mary Poppins as a slasher horror flick.

Another way it can backfire is if you can't find enough good footage to make a decent trailer, Genre Savvy audiences can extrapolate just how bad the rest of the material must be.

If it sounds too good to be true, it usually is.

Often a form of Misaimed Marketing. Contrast with Trailers Always Spoil, where the trailer is a little too honest. If it's a TV show's Title Sequence that lies, those are Bait and Switch Credits.