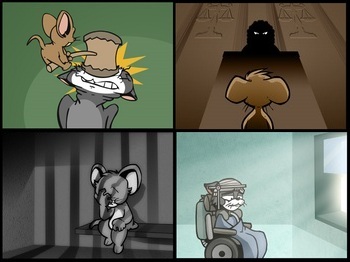 Tom and Jerry: The Lost Episodes

"Deconstruction" literally means "to take something apart." As one might expect, this is a very broad term, with a number of different definitions in literary criticism, theoretical physics, and even plain-old demolitions. Some of these are explained in more detail on the analysis tab.

When applied to tropes, or other aspects of fiction, deconstruction means to take apart a trope so as to better understand its meaning and relevance to us in Real Life. This often means pursuing a trope's inherent contradictions and the difference between how the trope appears in this one work and how it compares to other relevant tropes or ideas both in fiction and Real Life.

The simplest and most common method of applying Deconstruction to tropes in fiction among general audiences and fan bases, and the method most relevant to All The Tropes, takes the form of questioning "How would this trope play out with Real Life consequences applied to it?"

This doesn't mean magic and other fantastic or futuristic elements, or any other tropes must be removed or attacked for failing to match up with their own pretensions of self-consistent reality, of course. While sometimes perceived as an aggressive attack on the meaning or enjoyableness of a work or text, deconstruction is not properly about passing judgement (and in fact, the term "deconstruction" was picked over the German term "destruktion" to suggest careful attention to the detail within a text over violently emptying the work of all meaning). It means that all existing elements of a work are played without the Rule of Cool, Rule of Drama, Rule of Funny, and so on, to see what hidden assumptions the work uses to make its point. Sometimes you will hear this referred to as "played completely straight", and it can be thought of as taking a work more seriously on its own terms than even the work itself does, for the purpose of laying bare hidden meanings in the text.

For example, in Dungeons & Dragons, when a cleric reaches fifth level, he gains the ability to cast create food and water. Normally, the impact this would have on a society (especially a medieval or pseudo-medieval one) is completely ignored. A Deconstruction would explore how a society would react to that ability.

Note that while deconstructions often end up darker, edgier, sadder and more cynical than the normal version, with the deconstructive process often producing catharsis or seeming satirical by revealing the Fridge Horror inside a given instance of Trope, there is no reason they have to be. Deconstructions can exist anywhere on the Sliding Scale of Idealism Versus Cynicism. Expanding on the Dungeons & Dragons example above, a cynical deconstruction would involve the food-creating clerics either being enslaved for their powers or becoming the ruling class in a Dystopia, while an idealistic deconstruction would involve the alleviation of scarcities and hardships based on class. Either one is perfectly valid.

The reason fictive deconstructions often turn out as they do is that fiction by its definition virtually ignores anything that isn't specifically included, while hiding anything that is included but not spelled out. Thus, for instance, a work in which gender, or sexuality, poverty, race, or politics etc. should have been important but were never dealt with adequately is ripe for a deconstruction in which the fact that nobody talks about these topics indicates that something is amiss. Contrariwise, a work that attempts to pre-emptively avert being deconstructed in this way by stating, perhaps frequently, that certain topics aren't dealt with because they are specifically irrelevant to the story/setting (especially if there's no good reason they should be irrelevant), is ripe for an ironic deconstruction in which the supposed insignificance of these topics doesn't stop characters from regurgitating contemporary Real Life attitudes about them. The Deconstruction process thus often reveals things we weren't thinking about for a reason, perhaps revealing a trope or a staple of fiction as false/unrealistic/horrifying, which is why it tends to be depressing. (If a Deconstruction reveals a trope as beautiful truth it will probably be uplifting.)

Also note that Darker and Edgier, Rule of Drama and Cynicism Tropes do not turn works into Deconstructions. There are plenty of dark, edgy and dramatic tropes that are used without ever exploring the meaning behind them, or their realistic implications. While some of the most acclaimed works in their respective genres are deconstructions, and many deconstructions do utilize dark, cynical and dramatic tropes in the setting, it is the careful use and analysis of them that makes them acclaimed, not because they just have those tropes in them. See Not a Deconstruction.

We have many subtropes; most examples of Deconstruction will fit in one of those.

See also Reality Ensues for when this happens temporarily, usually for humor rather then deconstruction, and Fridge Horror, which is what people often think of deconstruction: revealing how really terrifying and dark something is by thoroughly thinking about it.

Please note: This page has been edited for clarity's sake. Please do not add any more examples. Add them to Genre Deconstruction or Deconstructed Trope or the appropriate subtrope. Where possible please move examples to these subtrope pages. This page is about Deconstruction as a method, and thus should be stripped down to meta-examples.

Examples of Deconstruction include:

Retrieved from "https://allthetropes.org/w/index.php?title=Deconstruction&oldid=1883094"
Categories:
Cookies help us deliver our services. By using our services, you agree to our use of cookies.