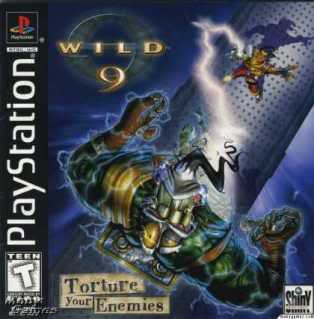 The slogan says "torture your enemies"... it's pretty clear what this game is about

Wild 9 is a 2½D action platformer developed by Shiny Entertainment for the original PlayStation. Their idea was to make a game similar to Earthworm Jim, which they mostly succeeded with on the gameplay and atmosphere, but obviously did not when it came to popularity. Possibly due to it being released in 1998, alongside a slew of big games, it was sadly overlooked and passed off by most reviewers as mediocre.

The game is set in the distant future, and the evil Karn has taken over the Andromeda Galaxy. The only ones left to oppose him are the Wild 9, a group of orphaned, teenage mutants, all with their own special abilities and talents. Led by Wex Major, user of the "RIG" and "Great Champion", they fight against the tyranny of Karn and his minions.

...But that's just All in The Manual.

At its core, Wild 9 is about a guy named Wex with a rather unspecified weapon called the "RIG", an arm-mounted tractor beam-like electric lasso thingy and is the only one capable of using it. With it, Wex can pick up and move objects, activate certain machinery, swing from it like a rope, and fire missiles and grenades, provided he's picked some up. The most unique feature of the RIG, and the game in general, is its ability to pick up enemies. This allows you to move them around, but most importantly, smash them against the floor, drag them along the ground, toss them off cliffs, put them inside death machines, decapitate them, lop them in half, jam them into moving fans, shove them into huge grinders, get them caught in gears, impale them on spikes, shove them inside death machines...

Basically, the game lives on Video Game Cruelty Potential, and revels in it. Oh boy does it revel in it.

Tropes used in Wild 9 include:
Retrieved from "https://allthetropes.org/w/index.php?title=Wild_9&oldid=1801235"
Categories: