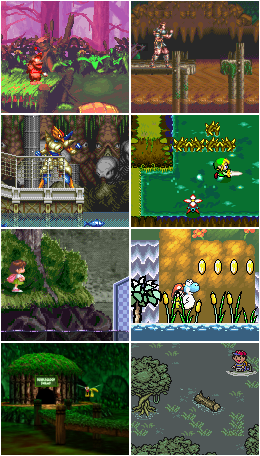 Their socks are never going to dry.[1]

A distant cousin of Jungle Japes and The Lost Woods, but somewhat more waterlogged.

Swamp levels in games tend to be filled with mosquitoes, gators, and other hostile wildlife. Sticky mud which makes movement difficult is also a common feature, as is quicksand.

The amount of water in the area may necessitate platforming if the hero can't swim, and may even turn the area into a water level at times if there's enough of it. Alternatively, it may contain Grimy Water which is either polluted or full of piranhas.

A Ragin Cajun can live here.

See also Swamps Are Evil and Mucking in the Mud.

Examples of Bubblegloop Swamp include:
Retrieved from "https://allthetropes.org/w/index.php?title=Bubblegloop_Swamp&oldid=1483731"
Categories:
Cookies help us deliver our services. By using our services, you agree to our use of cookies.