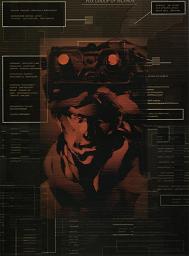 Metal Gear Solid, considered by some to be one of the greatest games on the PlayStation and by others to be an overrated, convoluted mess (though less so than its sequels), was released in 1998. With its cinematic style and fusion of gripping gameplay with an equally gripping storyline, it shifted the acceptable degree of Story to Gameplay Ratio, perhaps irrevocably, while also single-handedly popularizing the Stealth Based Game.

Basic plot summary: Six years have passed since the fall of Zanzibar Land and the death of Big Boss. Solid Snake, haunted by the death of both Big Boss -- who claimed to be his father -- and best friend Gray FOX at his own hands, has retired from his life as an agent for FOXHOUND, a special operations force for the United States military. His days of running dogs in Alaska are, however, brought to a close when he's kidnapped from his home and brought aboard a submarine beneath the Bering Sea. There, he's greeted by his former superior and "friend," Roy Campbell and the mysterious Dr. Naomi Hunter, who draft him into service once more.

This time, the United States is being held hostage by FOXHOUND itself, which has gone rogue and is being lead by a man who not only looks uncannily like Snake, but is himself called "Liquid Snake". Naturally, Snake's the only one who can stop his deranged doppelgänger and the Five-Bad Band working for him. What follows is a game that loves to break the fourth wall while also telling a surprisingly compelling and serious story about war, morality, and nuclear proliferation.

Upon the advent of the PlayStation, Metal Gear Solid became a huge hit for both its melodramatic and somehow incredibly juicy plot, and its wonderfully satisfying gameplay, which despite being the first 3D game of the series (hence the "Solid" in the title) avoided hitting the Polygon Ceiling.

The game later received a remake for the Game Cube in 2004 titled Metal Gear Solid: The Twin Snakes. Tropes specifically for the remake go on the bottom of the page.

The game's story has also been adapted into a graphic novel written by Kris Oprisko, with stylized, sketchy artwork by Ashley Wood that deliberately imitates Yoji Shinkawa's concept art for the game, and the graphic novel itself has been released in a semi-interactive format as Metal Gear Solid: Digital Graphic Novel on the PlayStation Portable. This same graphic novel, along with its sequel, was eventually released on DVD in Japan as Metal Gear Solid 2: Bande Dessinee, with full voiceovers from the Japanese cast. There's also a Novelization by Raymond Benson, who has also written book adaptations of James Bond films such as Tomorrow Never Dies, The World Is Not Enough and Die Another Day, as well as continuation Bond novels based on Ian Fleming's books and novels based on the Splinter Cell series.

A film version has been stuck in limbo for several years, but it might be released 2012. And it won't be directed by Uwe Boll.

Note: this page is for the original PS1 game and its ports and remakes (including The Twin Snakes for the GameCube). For the Game Boy version (which is technically a separate game), see Metal Gear Ghost Babel. For the rest of the series, see the main Metal Gear page. 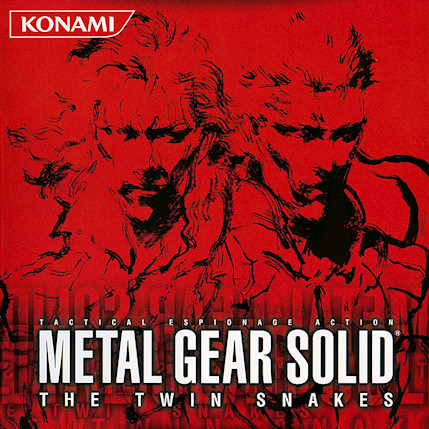 In 2004, the game was remade for the Game Cube as Metal Gear Solid: The Twin Snakes, co-developed by Canadian developer Silicon Knights, developers of the highly acclaimed Game Cube title Eternal Darkness: Sanity's Requiem. For the most part, the game was identical, with virtually the same level design and plot, but with a signifigant visual overhaul to bring the game's visuals up to the same standard as Metal Gear Solid 2. However, the dialogue, while almost entirely the same, was completely re-voiced (all of the original voice actors appear to reprise their roles in The Twin Snakes, along with Rob Paulsen, taking the mantle of the Cyborg Ninja instead of Greg Eagles, who voiced both the Ninja and Donald Anderson in the original), with the foreign accents of two characters (one of whom was American anyway and the other raised by an American) being lost (a trait that was carried on when both characters reappeared in Metal Gear Solid 4). Game mechanics from Metal Gear Solid 2 were added, such as tranquilizer guns, and all the references to Policenauts were changed to Zone of the Enders: The 2nd Runner.

Somewhat conspicuously, both the cinematics and music were completely redone, with mixed results. While the new soundtrack is sometimes considered to be superior to the original, the new cinematics have often been derided for their over-the-top (even by Metal Gear standards) style and blatant use of Bullet Time in imitation of the then popular Matrix movies and Max Payne games. Kitamura claimed in an interview that the cutscenes were initially to be redone to look exactly like their PS 1 counterparts, but Kojima had asked for them to be done in the manner seen in the final version.

Because of the aforementioned, The Twin Snakes continues to divide opinions to this day on whether it's a fantastic upgrade to an already-spectacular game, or a mockery of the original masterpiece.

The Twin Snakes provides examples of:

Retrieved from "https://allthetropes.org/w/index.php?title=Metal_Gear_Solid&oldid=1743184"
Categories:
Cookies help us deliver our services. By using our services, you agree to our use of cookies.