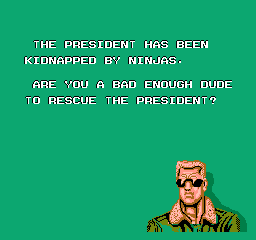 Some video games have epic, sweeping plots that could easily have been made into an action Miniseries instead of a video game. Others just seem to have a plot because people feel a little silly doing things for no reason, even if the real reason they're playing is because it's fun.

This trope is most often found in games, though there are other places it can be useful. When it is found in a game, there are two approaches. One is to have the plot All There in the Manual (literally), lest it get in the way of the gameplay. The other is to have an Excuse Plot.

An Excuse Plot is, in the simplest terms, a plot that is clearly there merely as a justification for the gameplay, or other form of flashy, show-offy-ness, to happen. In short, the story serves the needs of the gameplay, nothing more. It makes no pretense of intrinsic value, but simply provides some banter so you understand why the purple and non-purple units are shooting at each other.

An Excuse Plot is not necessarily a poorly written, minimalistic, or stupid storyline, only one that has been written to obviously showcase something else. Beware of the Anthropic Principle.

Save the Princess is the most common Sub-Trope.

Some games may not even bother with plot at all.

Examples of Excuse Plot include:

Retrieved from "https://allthetropes.org/w/index.php?title=Excuse_Plot&oldid=1862395"
Categories:
Cookies help us deliver our services. By using our services, you agree to our use of cookies.