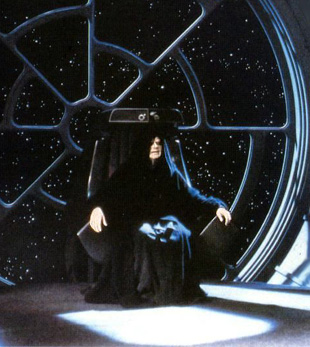 Everything that has transpired in this trope has done so according to my design.

A Big Bad (sometimes called the BBEG, or "Big Bad Evil Guy"), could be a character with Evil Plans or it could be a situation, such as a comet heading towards the Earth. It is behind all of the other bad happenings. The Big Bad can (and often does) exert effect across a number of episodes, and even an entire season.

The Big Bad may be confronted frequently, but is too powerful to finish off until the last episode of the sequence. The Big Bad character may work through Evil Minions and will almost certainly have The Dragon protecting him, to keep interest up and provide something for the good guys to defeat. When you look at a season-long story or a major Story Arc and you can identify that one villain as being the one in control of everything, that is the Big Bad. In many cases, you will find that while the Big Bad may be in control, the Dragon-in-Chief would still be the greater threat.

The term "Big Bad" was popularized in Buffy the Vampire Slayer. It was characteristic of Buffy's Big Bads for their identity or nature, or even the fact that they are the Big Bad at all, to remain unclear for considerable time. Occasionally, characters would even refer to themselves as "the Big Bad", whether or not they were; this is a Big Bad Wannabe.

A Big Bad character is also an integral part of the Five-Bad Band dynamic. The role remains largely the same, but it should be noted that they are the Big Bad of that particular organization. They are not just the leader of a Quirky Miniboss Squad, but is a set group to counter the roles in the heroes' Five-Man Band. Whether or not they turn out to be the Big Bad of the entire work of fiction is not set in stone (although more often than not, they will be).

If a show has a series of Big Bad jeopardies, they can function like a series of Monsters of the Week that take more than a week to finish off. If there is a Legion of Doom, you can expect the Big Bad to be involved somehow. They're probably sorted by power, with the strongest for last, following the Sorting Algorithm of Evil.

Evil Overlord, Diabolical Mastermind, The Chessmaster, Arch Enemy, The Man Behind the Man, and often Manipulative Bastard are specific types of villains who are liable to show up as Big Bads. If he's a Magnificent Bastard, Complete Monster, or Hero-Killer, the good guys are in big trouble. The heroic counterpart of this character is the Big Good, who will very often be the focus of this character's attention over The Hero at the beginning of a series. If a work of fiction is conspicuously lacking a Big Bad, it may be a case of No Antagonist.

See also Big Bad Duumvirate for two (or more) Big Bads working together (or not). Sometimes a Big Bad will get his start as a servant to another villain—if that's the case, he's a Dragon Ascendant. If the character who fills the role of Big Bad in most meaningful ways is nominally subordinate to someone else (someone significantly less menacing by comparison), he is a Dragon-in-Chief. If the story has many Big Bads, see Big Bad Ensemble.

Note that the Big Bad of a story is not always the most powerful or oldest existing evil force. Perhaps an evil presence along the lines of an Eldritch Abomination overshadows the work's setting, but is mainly divorced from the story's events—that would be the Bigger Bad. The Big Bad is distinct from that by being the main obstacle that the hero must contend with, though the Big Bad might try to harness the Bigger Bad in some way as part of their plan. (Whether or not this backfires may vary.)

Examples of Big Bad are listed on these subpages:

Retrieved from "https://allthetropes.org/w/index.php?title=Big_Bad&oldid=1866846"
Categories:
Cookies help us deliver our services. By using our services, you agree to our use of cookies.