You Are Number Six 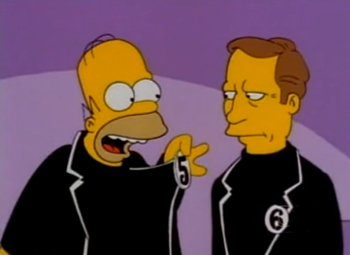 When a character has a number as a name.

Usually this carries dehumanizing implications. This can be for (at least) two overlapping reasons:

For some reason, these implications are usually somewhat lessened when the number in question is "zero". They also don't necessarily apply to spy or superhero Code Names that are numbers, unless they become part of a Secret Identity Identity. Having a low number (i.e. in the single digits) as a name is generally considered less humiliating than a large one.

Science Fiction stories, especially dystopias, are likely to use this trope to some extent. It's also common for prisoners to have serial numbers instead of names.

Note that several languages have numerical names (Japanese and Latin being the most likely to be encountered). In this case, the kids will be named in order of birth: literally, "first child", "second child", etc.

Bizarrely, this can actually also serve to humanize beings that have never had separate identities before. If you have a race of robots or drones that become sentient, they may adopt their numbers as their actual names.

See also: Numerical Theme Naming where many characters have names that incorporate or are numbers, and Seven Is Nana for Japanese characters named Nana as in "seven". And Heaven help you if your name is "Four" or any derivative thereof. Or 666.

Compare One-Letter Name. Not to be confused with I Am Number Four.

Examples of You Are Number Six are listed on these subpages:
Retrieved from "https://allthetropes.org/w/index.php?title=You_Are_Number_Six&oldid=1959410"
Categories:
Cookies help us deliver our services. By using our services, you agree to our use of cookies.