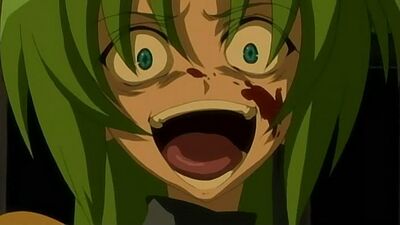 You can't spell "slaughter" without "laughter".

Your Applied Phlebotinum doomsday device has been activated. The MacGuffin is within your grasp. The good guys are locked away in the Death Trap. Your circuitous Evil Plan is three-quarters complete! You know what, screw being the Evil Overlord of the world -- you're already a god. There is only one thing left for you to do—but first things first:

The Evil Laugh. Don't knock it 'til you tried it, folks.

This has become an Undead Horse Trope long ago, and usually will produce nothing but pure Narm. There are only a few characters who are able to get away with this in modern media:

In any case, it has since devolved to the occasional evil chuckle (which may or may not be a bit scarier) or so every once in a while, except in certain cases, and the trope of laughing while your victim is helpless is definitely dead, as modern villains usually laugh while they work (to much better effect). A common subversion is to have a villain have an Un Evil Laugh, with snorting, chuckling and squeaking.

In Anime, haughty female villains (as well as some male ones) will overlap this with Noblewoman's Laugh. Other villains, for reasons known only to themselves, go for the Giggling Villain approach. Often goes well with Drunk on the Dark Side.

It's even more jarring (and awesome) when the villain in question is an emotionless character, proving Evil Has a Bad Sense of Humor every which way.

20. Despite its proven stress-relieving effect, I will not indulge in maniacal laughter. When so occupied, it's too easy to miss unexpected developments that a more attentive individual could adjust to accordingly.

Truth in Television: Passionate laughter, like screaming, is a great relief for stress and adrenaline with the added benefit of embarrassing and taunting self-conscious opponents. Just don't take it too far in public.

Compare Noblewoman's Laugh, Evil Is Hammy, Evil Gloating, Evil Has a Bad Sense of Humor, Laughing Mad, and Laugh with Me.

Examples of Evil Laugh include:

Lelouch: These hands of mine have been dirty for a long time now, Suzaku. Your coming to face me now doesn't matter at all. Hell, I welcome it even. I mean of course, you and I are friends.(starts laughing maniacally as the Tokyo Settlement collapses around him). [1]

I can stand the sight of worms
And to look at microscopic germs
But technicolor pachyderms
Are maybe too much for me! Muhahahahahahaha!!!

Mike: It only now struck him as funny; now that he's got some distance behind him.

Uncle Deadly: How's that for a maniacal laugh?

Maybe it was the atmosphere, but something about it, the way that it simply lacked anything to do with the things that should motivate laughter... There was no warmth in it, no humanity, no kindness, no joy. It was like Mavra herself -- it had the withered human shell, but underneath it all was something from a nightmare.

Sir Michael threw back his head and laughed and laughed. The sound set my teeth on edge, for there was little sanity in it, and it was a twisted mockery of the laugh I knew so well.

“a hearty and insane laugh, about as far removed from polite after dinner laughter as you can get. That was the kind of insane laughter even the truly insane have to practice for years to get right.”

Rukifellth: Once I regain my earthly body, I shall create a new cosmos. MY Cosmos. A cosmos of chaos where only the strong shall survive! Ha ha... Ha ha... Bwah ha ha ha ha ha!\

(5 second pause) It's not much fun making speeches about my plans without an audience...(pause) Ha ha...Ha ha...Bwah ha ha ha ha ha!

Murray: I AM MURRAY, THE EVIL DEMONIC SKULL! BWAHAHAHAHAHAHA!

The Prince: For I am the Prince, and the Prince rules! Mwahahahahaaa! This is your life, but you're playing by my rules! Hahahahahaaa!

O'Mally: Everyone has played right into our hands! Mwa-ha-ha-ha!!!1
Everyone Else: [Stares]
O'Mally: Okay maybe that was a little loud.

O'Mally: Now be careful. Don't give away our position with maniacal laughing.

Martellus: Aw... Seffie - I've missed that creepy laugh of yours.
Xerxephina: Hee hee! Isn't it good?! ...but I'm still working on the harmonics.

Dr. Insano: You can't just start laughing maniacally at the end of every sentence! You have to earn it! You have to say something dramatic, like "soon we will conquer Thailand, and tomorrow THE WORLD!"
Dr. Nye: (in movie) Today we conquer Thailand, and tomorrow THE ENTIRE WORLD! HAHAHAHAHAHA!
(Insano, Spoony and the Spoony Bum start laughing maniacally)
Dr. Insano: SHUT UP!!!

"But of course, Herr Bardue. In the last sim, I didn't even haff time to give zem my evil laugh.” She clenched her fists and looked at the ceiling. “BWA-HA-HA-HAH!"

Norm: That's my evil laugh. How is it, huh? I've been practicing.