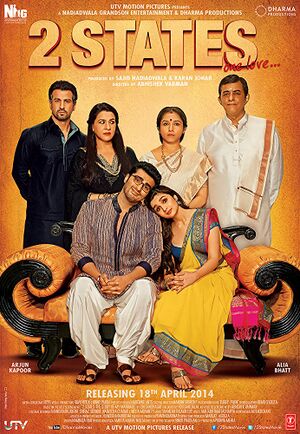 2 States is a 2014 Romantic Bollywood film, starring Arjun Kapoor and Alia Bhat, based on a semi-autobiographical novel of the same name by Indian author Chetan Bhagat.

Krish Malhotra (Kapoor), an engineer with writing aspirations from a Punjabi family from Delhi, and Ananya Swaminathan (Bhatt), an economist from a Tamilian Bramhin family from Chennai, met while pursuing a MBA degree ay IIM Ahmedabad, Gujarat. Despite a sightly rocky beginning, the pair falls in love and have a pretty serious romance during their time in the program, eventually becoming engaged. They decide to drop the news to their families together on their graduation day.

To their dismay, the event results in a total disaster: Krish's total loudmouth of a mother insults and demeans Ananya's more quiet and conservative parents, so naturally both sets of parents doesn't want anything with their children's loved. While temporarily deterred by this setback, Krish and Ananya decides that he will make both their families love their beloved and accept their marriage. Needless to say, this is easier said than done, what with the cultural, social, and interpersonal differences between both families.

Tropes used in 2 States include:
Retrieved from "https://allthetropes.org/w/index.php?title=2_States&oldid=1610139"
Categories: