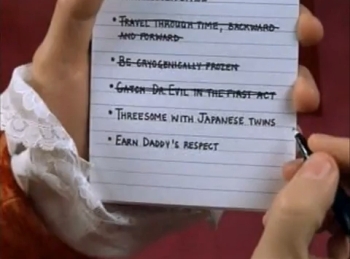 Well, at least he has his priorities in order.

"A father has to be a provider, a teacher, a role model, but most importantly, a distant authority figure who can never be pleased."
—Stephen Colbert, I Am America (And So Can You!)

Our hero may be a perfectly Nice Guy, respectable, successful, a loving husband and a good father. But what he really wants is for this one guy to acknowledge this.

Most often, that one guy is his emotionally distant father, though it can also be The Ace, The Obi-Wan, an Aloof Big Brother or especially that Always Someone Better individual, usually as an old friend of the hero. Almost always a Special Guest, and often a Large Ham as well. When it's a recurring character, usually a controlling parent.

A Fawlty Towers Plot will often ensue as our hero tries increasingly more convoluted schemes to convince the "Well Done, Son" Guy of his worth.

In other genres, this can be a bit more understated, with the "Well Done, Son" Guy simply giving our hero an approving nod from a distance (or saying, "That'll do, pig"). If the "Well Done, Son" Guy is a Trickster Mentor or Zen Survivor, they may have a very long and painful road ahead of them to get even that. May be part of an Inadequate Inheritor plot. The Fantasy-Forbidding Father usually inspires this sort of feeling. This dynamic is usually father-son. Mother-daughter and father-daughter are not too unusual, but mother-son is rare.

A really unpleasant variation is when the "Well Done, Son" Guy is already dead, which in most cases means the approval and emotional bonding will never happen.

Contrast So Proud of You.

Seto Kaiba: Those pathetic, clinging eyes on my back, I've felt them for years. In the world of games, there's no room for something like brotherly affection. Until you understand that, you'll never be anything but a loser!
Mokuba Kaiba: Please, Seto-sama, I only wanted your approval--!
Seto Kaiba: The loser suffers a penalty game. That's the rule of Death-T! [presses the button]

Barnaby: I just aspire to be someone worthy of his trust.

Batman: (to Huntress) This is good work.... No. This is outstanding work.

Fa Zhou: The greatest gift and honor is having you for a daughter.

Carl: For assisting the elderly, and services above and beyond the call of duty, I give you...the Ellie badge.

Dream!Poppy: A hundred years it took to build up the Bush name and you single-handedly destroyed it!

You're glad that your dad is alive. You feel good that he's claimed you and part of you want to make him proud. That's why you mailed Medusa's head to Olympus. You want him to notice what you'd done.

Christopher: I have my own TV show and production company!
Dad: And that shit got cancelled, didn't it!

Dukat: I don't think you're being entirely honest with me, Benjamin. You're not a man who hesitates to make snap judgements when the situation calls for it. It's one of the signs of a good commander. Now I'm asking for your opinion of me and I find it hard to believe you don't have one.
Sisko: All right. I think you're right. You have been judged unfairly. I've judged you unfairly. But I think you probably had good reasons for everything you did on Bajor.

Tidus: I hate you. I hated you so much. I've always wished you'd be gone. But deep down what I really wanted was just... your approval. For you to... tell me that I've grown strong.
Jecht: Looks like the kid will never grow up.
Tidus: That's not my fault. I can't help it. I'm your son, after all.
Jecht: Hehe... I guess you are.
[Both laugh.]
Jecht: Hey, cry-baby... You've grown strong.

Thane: I've taken many bad things out of the world. You're the only good thing I ever added to it.

Klaus: It seems I have misjudged you. Well done, son.
Gil: [suspicious] Is this another test?
Klaus: Erk. Please, don't make me laugh. Owch. No. No more tests, my son. The time for such things is over.

"After all, you made Bobby! All I made was you."

Wonder Woman: So he'd become just like you?
Batman: So he wouldn't.

"So, what am I gonna do with the Least-Likely-Inator, you ask? Make my daughter obey me, make my father love me? No, and double-no! Well, maybe later."