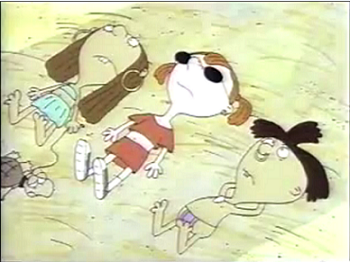 One of these kids is not like the other.

Cultures do not evolve identically. Even ones with similar backgrounds and languages have something they disagree about, and it just gets worse the more alien the two cultures are. Naturally, this has great potential for writers who want to introduce conflict to the plot, or just want to show off their worldbuilding skill.

Some tropes associated with Culture Clash:

Examples of Culture Clash include:

As her gaze rested on me her eyes opened wide in astonishment, and she made a little sign with her free hand; a sign which I did not, of course, understand. Just a moment we gazed upon each other, and then the look of hope and renewed courage which had glorified her face as she discovered me, faded into one of utter dejection, mingled with loathing and contempt. I realized I had not answered her signal, and ignorant as I was of Martian customs, I intuitively felt that she had made an appeal for succor and protection which my unfortunate ignorance had prevented me from answering.

A spanish officer (uncovering): Who are these men who rush on death?