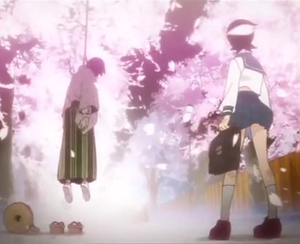 Whatever the reason - for fear or shame, (a guilty conscience, the world is simply too much to bear, or unreasonable self-hatred) - the character may be Driven to Suicide. This may be as little as pondering their existence or as much as holding a gun to one's head. Most times the character will have second thoughts, or will be talked down by a friend. But in shows where Anyone Can Die, the character may go through with it. In any case this is a powerful way to underscore the desperation of the character. In a Backstory, being Driven to Suicide can illuminate the character's Dark and Troubled Past.

In some cases the reason for suicide may not be depression, but honor, as with ritual suicide. This obviously is more common in Japanese works (as in Japanese culture, traditionally suicide can be done to cleanse one's honor) than in Western ones (as in some Christian sects, suicide traditionally is a shameful act—but classical settings allow it to be presented as honourable, e.g. in Shakespeare). It was also accepted by various ancient Greek philosophies, particularly that of the Stoics, as well as the ancient Romans and Egyptians; both of whom lauded it as a dignified and timely alternative to illness, dementia, or disgrace. Some Proud Warrior Races, such as the nomadic Scythians, preferred suicide as an alternative to dying in bed, thus making this trope Older Than Feudalism. By contrast, Abrahamic religions (Judaism, Christianity, Islam, et al.) abhor suicide, believing that only God is permitted to say when a life may be ended—however, there is considerable debate over issues like terminal illness and capital punishment.

Sometimes this is done to deliver An Aesop about teen suicide by having Long-Lost Uncle Aesop show up in a Very Special Episode.

At the other extreme, victims of The Corruption, Compelling Voice, or other forms of compulsion may resort to becoming a hero to prevent the monster they are about to become from being unleashed on the world. This may allow Dying as Yourself.

This is regularly played for laughs, despite being Dude, Not Funny. Also incidentally, pushing someone into this is treated the same as premeditated first-degree murder in many countries. Unfortunately, minors can be total monsters to each other, and grave bullying at school or elsewhere often can have very sad consequences (the bully more often than not also gets off with a simple slap on the wrist, too).

For any tropers who feel this way, You Are Not Alone. There are numbers you can call. Please, talk to someone.

No real life examples, please; we don't have any reason to torment the survivors by reminding them of this.

Examples of Driven to Suicide include:

Retrieved from "https://allthetropes.org/w/index.php?title=Driven_to_Suicide&oldid=1946490"
Categories:
Cookies help us deliver our services. By using our services, you agree to our use of cookies.