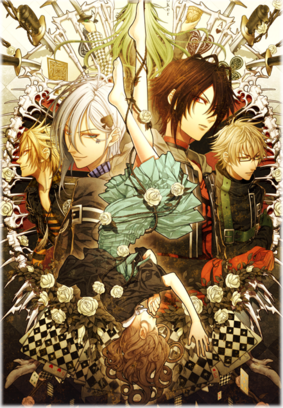 An Otome Game released by Otomate in 2011.

A young woman wakes up and finds herself in a space between dimensions. She is confronted by a young boy who tells her that he attempted to move from his world to hers. However, he made a mistake and ended up colliding into her mind. In doing so, he accidentally wiped out all of her memories (including her name, which you can choose). Eventually, the boy, Orion, will become further ingrained in her mind the longer he stays inside her head, and eventually she'll end up losing all sense of self. But not all is lost. There is one way to get him out: regain your memories.

At this point, she is offered a choice between four worlds: heart, spade, clover, and diamond.

An interesting spin on the otome genre. Instead of having the heroine attempt to win the heart of a guy, she is in a pre-existing relationship. A part of the gameplay is to help the heroine adjust to the now-unfamiliar world without arousing the suspicion of those close to her.

In 2015, an English translation was published by Idea Factory under the title Amnesia: Memories on PS Vita and PC. Also released on iOS and Android.

For the survival horror title by Frictional Games, see Amnesia the Dark Descent.

Tropes used in Amnesia include:
Retrieved from "https://allthetropes.org/w/index.php?title=Amnesia_(visual_novel)&oldid=1816179"
Categories: