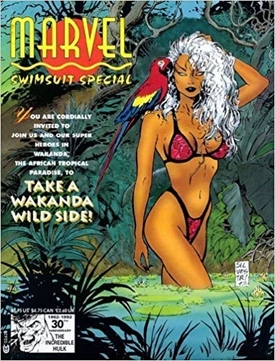 Does seeing Storm in a bikini make up for the Incredibly Lame Pun?

Simply put, an episode where the cast decided to take a break and go to the beach or a swimming pool for some wet and splashy fun.

Often combined with or immediately following a Recap Episode, the Beach Episode exists solely for the purpose of getting the female (and sometimes males too) cast into bathing suits. Sadly for the fanboys, beach episodes are usually extreme examples of Filler and treated accordingly.

Naturally, it also acts as a Breather Episode in arc-heavy stories.

Common in, but hardly limited to, anime series. Often shows up in Side-Story Bonus Art.

Cousin to the Hot Springs Episode, which usually takes place in highlands. Often, the actual beach also gets replaced by a swimming pool.

In anime and live-action television, a Beach Episode might overlap with the Vacation Episode, usually as a trip to a tropical locale.

Expect one of the characters, usually a female, to exclaim "It's the ocean!" when the gang first arrives on the scene

Note: It sometimes occurs that the Beach Episode is interrupted by the actual plot of the story. For example, the heroes are taking their well deserved beach trip when the villains decide to show up and cause trouble.

Sometimes you'll meet the Surfer Dude here. Also a good spot for a random Beauty Contest. Smashing Watermelons is a popular party game, as is volleyball. And since people usually go barefoot at the beach, don't be surprised if some Foot Focus shows up. Also expect some Beachcombing.

Examples of Beach Episode are listed on these subpages:
Retrieved from "https://allthetropes.org/w/index.php?title=Beach_Episode&oldid=1952898"
Categories:
Cookies help us deliver our services. By using our services, you agree to our use of cookies.