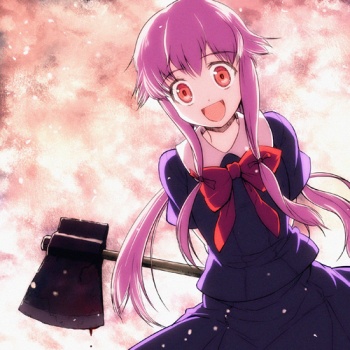 She'd do anything for love. Anything.

What's that, love? You don't know what a yandere is? Why, I'll happily explain it all for you, precious!

The word "yandere", a term that blossomed in Moe fandom, refers to a character who is crazy about someone else. Literally. Despite the anime-inspired name, this type of character is much, much older than that, as one of the earliest examples is the Mesopotamian goddess Ishtar (Inanna).

A colloquial American term that includes the type would be "psycho hose beast".

The character almost always appears perfectly cute and harmless on the surface... but underneath they may be obsessive, controlling, and sometimes just plain insane. Woe to anyone who happens to be the object of their often genuine affection. Even more pity should be saved for anyone who gets in the way -- the psycho-obsessive is amazingly unwilling to put up with any rivals (but the rivals had it coming). There could be a long mental instability; the girl's always been just a little bit off. Could be the product of Break the Cutie. Often eventually goes off the deep end and becomes an Ax Crazy Girl with Psycho Weapon, and that's just fun. May also be Not Good with Rejection. As a result they are potentially scary.

They come in two flavors:

Such characters are mostly female, but male examples exist.

Compare with the Violently Protective Girlfriend who can become Axe Crazy when the love interest is in danger but is otherwise much more stable mentally. Yuri examples overlap with Psycho Lesbian. See also Living Emotional Crutch for a reason why she goes from affectionate to murderous.

More details are available on the Analysis page, such as its history and its appeal.

See also Clingy Jealous Girl, her Spear Counterpart Crazy Jealous Guy, Love Makes You Evil, Love Makes You Crazy, Stalker with a Crush, Domestic Abuser, Violently Protective Girlfriend and If I Can't Have You. Compare Stepford Smiler and Psycho Supporter. Contrast with Bitch in Sheep's Clothing, in which a character is consciously using the illusion of purity and niceness to cover up a sadistic true nature (Though a BISC can become a Yandere if we add mental instability to the mix). At the extreme, A Love to Dismember can occur. Don't confuse with Yandere Kanojo, a manga which surprisingly doesn't involve actual yandere.

It should be noted that while many below listed examples are drama and horror ones, this trope is not exclusively Played for Drama. It might just as well be Played for Laughs through Comedic Sociopathy as it is for drama or horror.

Almost all the examples listed below are spoilers, so read at your own risk.

Examples of Yandere are listed on these subpages:

Wait, you're leaving? No, don't leave! I thought I was the perfect read! I saved my best editing for you! You have to stay...!

Retrieved from "https://allthetropes.org/w/index.php?title=Yandere&oldid=1963873"
Categories:
Cookies help us deliver our services. By using our services, you agree to our use of cookies.