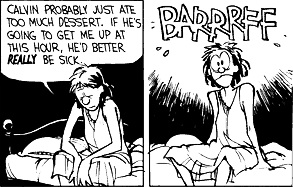 If a character expresses a wish that things were different and actually gets what they wished for, it is very possible that the results will not live up to their fantasies.

The circumstances can vary on how the wish is made, then consequently granted. The character making the wish may or may not have known that it was actually going to be granted, and the thing which grants it may be anything, depending on the genre—a wish-granting Genie who wants to show the character the error of their ways or just plain wants them to suffer; a sudden appearance by Louis Cypher ready to offer a Deal with the Devil; a tour through an Alternate Timeline; or even just an ironic twist of fate. The "deal breaker" that makes the wish not worth it also comes in a lot of possible flavors: maybe the character finds out that to get what they wanted they must give up something even more important to them; maybe the element of their life they wanted gone is really essential to who they are; maybe their wish has consequences they haven't thought of—or maybe they find out that It's the Journey That Counts and that Wanting Is Better Than Having.

This is an elementary form of Deconstruction - The character wants X, and then they find out X has unpleasant unanticipated consequences. Thus, X is deconstructed—the plot shows that X isn't as great as you think it is, and in fact may not be what you actually want at all. Nine times of ten this is an outright Aesop, though strictly speaking it doesn't have to be. A crucial element of playing that angle well is making the "deal breaker" a meaningful, inherent flaw to the original wish rather than something tacked on or that could have easily turned out differently if the character had more common sense. Otherwise, a Broken Aesop is almost guaranteed.

Often a cause of Blessed with Suck, though not the only one; wont to count as an Opinion-Changing Dream; contains the same type of irony as Ironic Hell. In some cases the experience may lead the wisher to discover an Awful Truth.

Sub-Trope of Be Careful What You Say.

Super-Trope of It's a Wonderful Plot, I Wish It Was Real, I Wished You Were Dead and Rhetorical Request Blunder.

Compare Gone Horribly Right, when science or logic is involved rather than wishes.

Contrast the Literal Genie, which ignores the intent of the wish in favor of the exact words; this trope is about the complications that arise when you get exactly what you wanted, rather than exactly what you said. A Jerkass Genie is likely to cause this to happen, if he doesn't just twist your words entirely.

Examples of Be Careful What You Wish For include:

Retrieved from "https://allthetropes.org/w/index.php?title=Be_Careful_What_You_Wish_For&oldid=1958038"
Categories:
Cookies help us deliver our services. By using our services, you agree to our use of cookies.