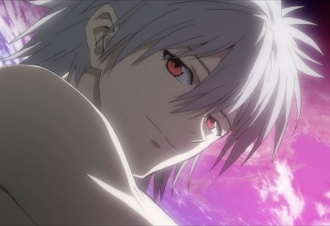 He looks content because he just killed a kitten.

If he's lucky, he's an Anti-Hero. He's much more likely to be the Lovable Traitor, a Trickster, or The Rival. But usually, he'll just turn out to be a villain, sooner or later. He will be aloof, often speaking cryptically and ending every sentence with a flip of his hair and a smirk. If he wears glasses, they'll glow often. Or he'll be quiet and shy, barely cracking a smile, yet he'll still be able to thoroughly kick your ass. Sometimes, in more recent cases, he'll show bisexual tendencies, more likely if he's the bad guy. He'll have special powers, since white hair on a young person who isn't albino is rare, which makes you wonder about the red eyes... If he's a good guy, he'll still seem aloof most of the time.

Despite the wide range and use of Hair Colors for characters, there's an eerie specificity to the use of white (silver works too, but not blonde) hair when coupled with a handsome, vaguely effeminate face. The (usually long and rarely tied back) white hair is very frequently coupled with redeyes. This character will never be as morally set in his ways.

Within anime, this may have a cultural explanation. White skin is considered attractive in nobility and women, but glaring white is otherwise commonly associated with death.

For some reason, this trope applies much more strongly in shows with predominantly male audiences than in something like Shojo, where the character will still tend to be aloof, shy, or outright eerie.

White haired guys with dark skin (such as Turn a Gundam's Loran) are typically exempt, because it's often used as a simple contrasting color like blonde or red hair. Occasionally, perhaps to preserve the white=death rule, foreigners are exempt from this too.

Commonly prone to Minor Injury Overreaction. Compare with Blond Guys Are Evil and Evil Albino, which are more western alternatives of this trope. Compare and contrast with the Distaff Counterpart, the White-Haired Pretty Girl, who is less likely to be evil and more likely to be magical.

Expect a White-Haired Pretty Boy to have a good share of fangirls, or even be subjected to Misaimed Fandom. A white-haired pretty boy is also often a Man in White.

Examples of White-Haired Pretty Boy include:

Retrieved from "https://allthetropes.org/w/index.php?title=White-Haired_Pretty_Boy&oldid=1920183"
Categories:
Cookies help us deliver our services. By using our services, you agree to our use of cookies.