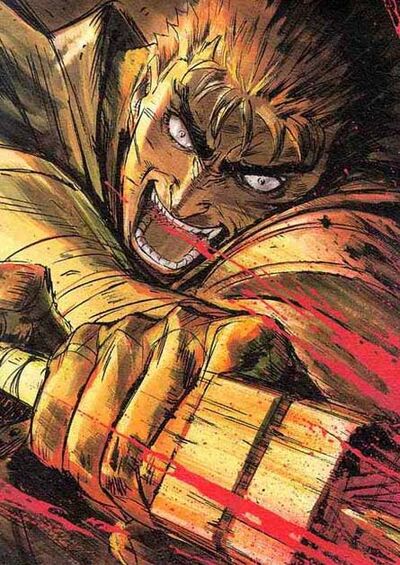 The Black Swordsman walks the land, a brooding, blood-stained figure. His name is Guts, and wherever he goes, the demons from Hell follow. Guts bears the cursed brand of sacrifice on the back of his neck, which draws the demons to him -- but he is also one the strongest men in the world and owns a very big sword, and when the demons find him, their deaths aren't pretty.

Guts is a warrior haunted by his past; namely, the events of his life that ended in the loss of his arm, his eye, and everyone he cared about. He walks the Earth seeking only one thing: vengeance against Griffith, an old friend who betrayed Guts and sacrificed him in aid of his own rebirth. Griffith became a powerful and near-godlike demon as a result, so Guts' revenge will not be gained easily.

Guts loves the challenge, though, since he grew up on battlefields. Born from the womb of a hanged woman, Guts had to fend for himself from the moment he hit the (gallows) ground -- he pretty much became a mercenary the moment he learned to walk. He wears fearsome armor, has a cannon where his arm used to be, and carries the Dragon Slayer sword on his back wherever he goes.

The Black Swordsman wants revenge, and if he has to cut his way through every demon in Hell to get it...well, that's just a bonus, right?

Not to be confused with the classic arcade game, Berserk -- also known as Kenpuu Denki (Sword Wind Chronicle) Berserk in Japan -- is an ongoing manga series by Kentaro Miura set in The Dung Ages country of Midland. After three volumes establishing the setting, Guts, and Big Bad Cosmic Horror the Godhand, the story goes into an eleven-volumes-long flashback which reveals the details of Guts' horrific childhood and how he was conscripted into the Band of the Hawk, a mercenary band led by the charismatic idealist Griffith. The group eventually becomes the most successful and celebrated force in Midland -- but since this series is far on the "cynical" end of the Sliding Scale, the success doesn't last.

Aside from Griffith, the Band of the Hawk arc sets up the other major characters of the series: Casca, an ill-fated female mercenary who eventually becomes Guts' love interest; Nosferatu Zodd, a demonic but honorable Blood Knight who cements the reality of demons to both Guts and Griffith; and the Skull Knight, an enigmatic figure who opposes the Godhand.

When Guts and Griffith's luck finally turns, the Band of the Hawk arc ends messily, and the series returns to the present day to show the deep-rooted effects of everything that happened in the previous arc. In later arcs Guts calms down somewhat, encounters non-demonic supernatural creatures and gathers a new, smaller group of companions; at the same time, Griffith slowly spreads his influence across the world.

The series was adapted into a twenty-five episode anime that covered the opening and Band of the Hawk arcs -- which means that the anime ends at the single most depressing point of the manga thus far. The manga is still running in Japan (as well as America and every other country where it's allowed).

In 2011, a new anime film trilogy based on the manga and produced by Studio 4°C was announced -- and it is the first part of a project that intends to fully adapt the manga's story. The first of the three movies, Berserk Golden Age Arc I: Egg of the Supreme Ruler, was released on February 4th, 2012.

There's also a fangame created by the maker of Doom the Roguelike. Notably, despite technically being a Roguelike, it plays more like an arcade game than Nethack, having special moves and being an Endless Game where you fight a neverending series of enemies.

Berserk is definitely not for children; it is one of the most violent Seinen series ever drawn, and it often verges on being pornography (God help if you actually get aroused by it). Any given reader could be left wondering what the unholy fuck is going on inside of Kentaro Miura's head.

Tropes used in Berserk include:
Retrieved from "https://allthetropes.org/w/index.php?title=Berserk&oldid=1962273"
Categories:
Cookies help us deliver our services. By using our services, you agree to our use of cookies.