Everything About Fiction You Never Wanted to Know.
(Redirected from Cosmic Horror)
Jump to navigation Jump to search 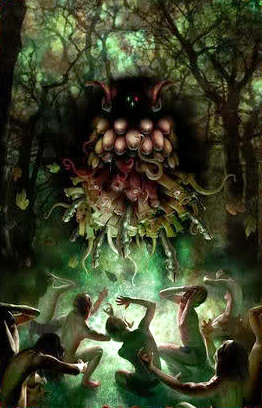 Well, hi there! My name's *sound of all joy being torn from your very soul*, but ya'll can just call me Shubby. [1]

How to describe these grotesque mockeries of natural law? There are no words that can encompass such disgusting foulness, not in English or any other human tongue. They are The Other. The Inconceivable. Alien beyond comprehension, their sole existence is an affront to all reason. We could speak of painfully dissonant noises and nauseating colours, ichor-dripping vermiform tentacles and abyssal yonic voids, or complex mathematical geometries, but those are mere superficialities. Monstrous and sick though these stigmata are, they do not define the abominations; they are merely among some of the more common symptoms of their underlying wrongness.

Eldritch Abominations are not simply creatures that look horrible on a metaphorically cosmic scale. They are alien, madness-inducing reality warpers who literally are horrible on a cosmic scale. Eldritch is not just anything that looks like an ugly mashup of different kinds of Body Horror - what actually defines the Eldritch Abominations (or as we puny Homo sapiens can only define them) is their defiance of natural law, as humans understand it. They are the things that should not be, the ultimate aliens. It is this that makes them abominable, and it is this that horrifies and reduces to gibbering madness all but the strongest of those who encounter them. Such laws as they do obey, such as When the Planets Align or Sealed Evil in a Can, are their nature, not ours.

They are native to the genre known as Cosmic Horror Story, but they are not confined to it. Mild examples can be found throughout the Horror and Fantasy genres. Greater abominations can occur in almost any type of fiction, so long as enough Cosmic Horror Story tropes are used. Usually they derive, at least in inspiration, from Lovecraft's work.

Physically, Eldritch Abominations range from almost human, through big ugly monsters, to the unimaginably bizarre. Generally, the weirder they look, the more powerful they are, but this isn't a universal rule. Here, the "ugly" in "big, ugly monster" doesn't just mean that it's horrible to look at -- it means that there's something about it, about the way it looks, or the spaces through which it moves, that violates every law of reality as you know it. "Big" doesn't just mean that it could use the Empire State Building as a toothpick -- it means that the... thing doing just that is only the barest fraction of the monster's true form, the 3-dimensional tip of a multidimensional iceberg. Eldritch abominations are perhaps the biological equivalent of Absolute Comparative: they are uglier, they are bigger, and they are more powerful than anything else in existence. Some abominations are so eldritch that even lesser abominations find them abominable. Some look approximately human, but just reading their name condemns you to Mind Rape. If you see one of these in the flesh, it's too late to run.

The most eldritch of the abominations come from Beyond. Whether they are from beyond the stars, before the dawn of time, or a place incomprehensible to humans, they are alien to this universe and its laws. The creatures may actually outnumber humanity -- trillions may dwell in the Stygian abysses far below the ocean waves, trillions of trillions may drift between the stars -- but they prefer wild and lonely places, where people seldom tread.

Slightly milder abominations can get an exemption, provided the reality-screwing does not override all of their rules and set a permanent stellar battle that anything that gets close dies horribly over a long period of time with so much excessive Mind Rape (Serial Escalation, anyone?) that Brain Bleach will be necessary. They are also typically the descendants of greater abominations or the work of mad wizards or mad scientists who harnessed another dimension's powers. These include some of the rarer varieties of undead, so long as they are rare and the product of ill-advised breeding programs.

This trope has some overlap with Starfish Aliens. However, Starfish Aliens aren't necessarily horrific or unnatural; they're alien only because they evolved in a different environment than humanity and can be helpful or neutral, whereas Eldritch Abominations have a deep wrongness to them, no matter where you find them. For example, while Starfish Aliens are usually willing to take on a A Form You Are Comfortable With to avoid breaking your mind if they can, most Eldritch Abominations won't even acknowledge or realize you have one to break (and the rest either can't or won't care) and are thus more often cast as antagonistic.

Of course, this antagonism applies passively as much as actively, if not more so towards the former - while they can be helpful or neutral, most Eldritch Abominations are way beyond the whole alignment system and are merely uncaring or incomprehensible, treating Earth as at best a colorful plaything - and at worst, they're absolutely insane Omnicidal Maniacs to whom this ball of rock is little more than Collateral Damage.

Eldritch Abominations will rarely be seen by people; showing them too often can make them seem less unfathomable and closer to basic Starfish Aliens.

No self-respecting fantasy RPG seems to do without one or more of these (except some of the Evil Witchking villain variety, and even then, not always). Typically, Eldritch Abominations in Video Games aren't depicted as omnipotent and implacable. But if they were, one of their attacks would take out ALL of your H.P. And destroy your computer, or at least delete the game, in the process.

If an Eldritch Abomination exists in a story where the primary antagonist is of a more human scale, it's probably the Bigger Bad. See God of Evil, Demon Lords and Archdevils, The Legions of Hell, and The Fair Folk for supernatural horrors that are knowingly malevolent, rather than simply alien and amoral.

When their appearance is uncomfortably human-like, see Humanoid Abomination (or, perhaps, The Fair Folk), but never expect them to be any nicer, though. When humans are regarded as this by non-humans, this is a case of Humans Are Cthulhu.

Remotely related to Ludicrous Speed, which will break your brain in a similar fashion. Also, Our Monsters Are Weird, Eldritch Location, and Divide by Zero, which often overlap with this, thanks to their nature.

See Did You Just Punch Out Cthulhu?, when one of these abominations has their ass handed to them. See also Surreal Horror.

Once again, please note that a character/creature merely being extremely ugly is not, in and of itself, an example of this trope.

No real life examples, please; If you can give an example of this in real life we have bigger problems than editing wikis.

Examples of Eldritch Abomination are listed on these subpages:
Retrieved from "https://allthetropes.org/w/index.php?title=Eldritch_Abomination&oldid=1941940"
Categories:
Cookies help us deliver our services. By using our services, you agree to our use of cookies.