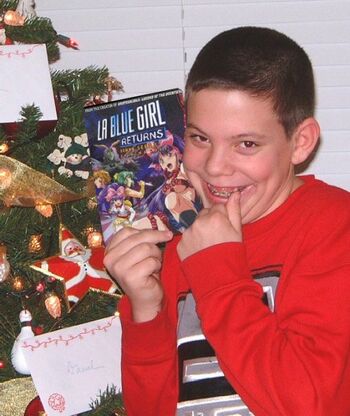 That kid's sure going to enjoy the nice cartoon his mom and dad gave him.

All fantasy, space operas, fairy tales, everything with talking animals, anything with a child as the protagonist, Superhero movies, Comic Books, and Animation Age Ghetto is okay for kids, right?

Well, sure, if you want to scar them for life, shove their hearts into a woodchipper, confuse them to an overwhelming extreme, or teach them things and/or words they really shouldn't know yet.

If you are paying attention at all, you will notice that many Fairy Tales are stories of murder, theft and much worse. Several stories starring animals - particularly very old versions - are just as bad. A truly astonishing number of people fail to get it in their heads that animated films can be for adults only even if they're not X-rated. Many people assume All Animation Is Disney, which is a risky thing to do as Disney, for the most part, outbowdlerized Bowdler. In other words, these people who say that something is for kids because it's fantasy, animation, superhero, all of the above, or prominently features child characters are Comically Missing the Point.

You'd think that rating labels on posters and cases would prevent this, wouldn't you? The 1970s era warning, "Parental Guidance Suggested - some material may not be suitable for pre-teenagers," was somehow not clear enough, so the redundant extra rating "PG-13" was created, and yet today parents take their kindergartners to PG-13 movies anyway.

In the case of many fairy tales, this is a side effect of changing values over time. Many of these stories were told to children to Scare'Em Straight, though others were meant for adults. Over time, the focus has shifted from depicting horrible consequences of bad behavior to showing positive traits being rewarded, and as such, the stories have become lighter in tone. The older versions, especially those by The Brothers Grimm, offer ready-to-use Darker and Edgier for older audiences. Values Dissonance also applies across cultures, to the point where uninitiated fans insist that foreign kids' shows were really for teenagers or adults because their home country would never allow some of the content to be shown to anyone below that age.

It must be said that, fortunately, many people are starting to get wise to this trope. It still exists, however, and anything that you have seen people considering "for kids" that really shouldn't be watched (or read, or whatever) by anyone too young to drive can be put here.

What isn't considered when talking about kids watching films that aren't appropriate for their age, is that most of them grow up and don't have traumatized existences, as most kids simply ignore what they don't understand and when they do, it helps them deal with mature situations when they grow up.

See also Subverted Innocence. Can be a result of Misaimed Marketing. Audiences may receive an early warning with an R-Rated Opening. Animation Age Ghetto is the animation-specific subtrope (in that it's this trope applied to the entire medium). What Do You Mean It's Not for Little Girls? is the Moe Seinen subtrope.

List only things that are or were commonly mistaken as being for kids. Contrast with What Do You Mean It's for Kids?.

Examples of What Do You Mean It's Not for Kids? include:

Note that the original trailer for the film made absolutely no secret about the grimness of its content, presumably trying to avert this trope. Too bad they hadn't thought to do the same for the poster, not realizing that DVDs would someday sport that deceptively-peaceful image.

Superhero films are no stranger to this trope, with most of them rated PG-13 and some rated R.

As mentioned multiples times above, any movie with the slightest potential for merchandising will probably have toys made for them. Often regardless of the film's actual rating.

Retrieved from "https://allthetropes.org/w/index.php?title=What_Do_You_Mean_It%27s_Not_for_Kids%3F&oldid=1963916"
Categories:
Cookies help us deliver our services. By using our services, you agree to our use of cookies.