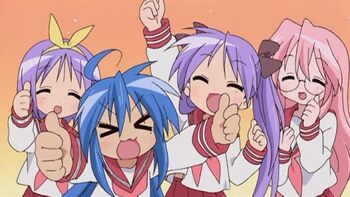 Imagine Azumanga Daioh meets Seinfeld, on even more sedative with a fair helping of Otaku Bait.

Lucky Star is a Slice of Life manga by Kagami Yoshimizu, featuring four high school girls. The main focus is Konata Izumi, an Otaku Surrogate whose Japanese pop culture knowledge is truly staggering. Drawing on a huge number of Otaku references, Lucky Star is more or less a show about nothing in particular. Notable for being the largest example of the Puni Plush style and its rather eccentric fanbase.

Kyoto Animation used the manga as the basis for a highly successful Anime series, which got acquired for distribution by BANDAI Entertainment, and dubbed with around the same casting as Haruhi... or some of the in-jokes would not be translatable at all. It should be noted that most of the references were Kyo Ani's own additions, in order to cash in on the merchandising of anime in general, mainly from Haruhi. It worked; Lucky Star is currently the studio's most marketable show, with many CDs and video games being made even 3 years after the anime ended. A stage musical adaptation has been green-lit in 2011.

This series also has a character sheet, Memetic Mutations, WMG, Headscratchers, and fanfic recommendation. A Shout Out section is being built to put all the references that Lucky Star makes to other series.

A different bizarre spin-off Manga, Boo Boo Kagaboo, was made by the creator of Nyoron Churuya-san. It was licensed by BANDAI, but they later cancelled its release.

The anime is now available on Crunchyroll.

Not to be confused with a certain Madonna song, or with the science-fiction novels by Isaac Asimov, or a Paper Mario item, one of the "Chinatown bus" lines operating between Boston and New York City, or anything else named as such.

Tropes used in Lucky Star include:

Retrieved from "https://allthetropes.org/w/index.php?title=Lucky_Star&oldid=1965648"
Categories:
Cookies help us deliver our services. By using our services, you agree to our use of cookies.