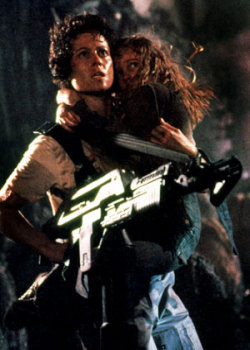 "Get away from her, you BITCH!"

Bears usually won't attack humans - but get between a mother bear and her cub, and she'll tear straight through you. Apparently, the same rule applies to human parents. Threaten their husband/wife, child, boyfriend/girlfriend, friends, cat, etc., and you are in for a world of hurt. Never harm someone's loved one—whatever the goal, it's not worth the consequences. Losing their loved one may cause a drastic Start of Darkness into villainy or Anti-Hero-dom...anything if it will get their revenge. And not just on their own enemy but on anyone who would inflict this same pain on others. Of course, it's not always dark—sometimes, righteous awesomeness ensues, and the hero reclaims their child/whatever with a tearful embrace.

Oftentimes, when a previously perceived meek mother goes into this mode, it's her Crowning Moment of Awesome. Heaven help you if an Action Mom invokes this trope. And if you think a normal Mama Bear is fucking scary, hell hath no fury like a Motherly Scientist with access to One-Man Army levels of weaponry/technology/money/superpowers to protect her children. It can lead to a Did You Just Punch Out Cthulhu? moment.

Men who exhibit Mama Bear tendencies are referred to as "Papa Wolves" rather than "Papa Bears"- Disney aside, male bears are notoriously poor parents in the animal kingdom, in fact, infanticide among bears is the main reason why mama bears are so protective in the first place, whereas male (and female) wolves will react to their offspring being threatened in a very similar manner to mother bears. Due to the Double Standard, there are some differences however.

While Mama Bear moments are usually treated as awesome, they're also...well, scary. Even the children Mama Bear is protecting are often scared by it. Sometimes this is even highlighted by the children starting to cry after the moment is over and the danger gone—which of course turns Mama Bear back into the Apron Matron. Papa Wolf incidents on the other hand receive standing ovation from the kids, and comments like: "You were so cool Dad!" Notice how most Mama Bears are mothers of main characters, while Papa Wolves tend to be main characters themselves.

When invoked by a woman, this trope is occasionally criticized as sexist against both sexes. This trope is also known as the Uterus of Justice, because it often seems that only a child in danger can turn a woman into a Badass (other than being scorned, and revealing fury like which hell hath none), and only a woman (and never a man, the dick) can care enough about a child to be driven all the way from mild-mannered to Badass just by seeing them threatened.

Sometimes overlaps with Apron Matron. Can be a cause of Let's Get Dangerous, showing that the sweet and caring mother figure is Not So Harmless. May be a Knight Templar Parent. Provides both simple and believable way to switch someone between "Badass" and more "cute" modes without compromising character as either. After all, if It's Personal...

If an older sibling is the one who takes up the role, s/he is a case of Big Brother Instinct / Big Sister Instinct. For a teacher who behaves like a Mama Bear if their students are threatened, see Badass Teacher.

Related to Beware the Nice Ones and Berserk Button. See also the non-human counterpart, Monster Is a Mommy. Not to be confused with Everything's Worse with Bears (unless you're dealing with a literal Mama Bear). The Violently Protective Girlfriend is a much younger form of this trope that applies when the mate is in danger. Evil characters can use this too; after all, Even Evil Has Loved Ones. A particular Subtrope is the Badass and Child Duo which can take the form of a female badass protecting an orphaned, unrelated young child, though male badasses are more common.

Remember when adding examples that this is a female only trope. The male equivalent is "Papa Wolves" so all male examples should be placed there. When Mama Bear and Papa Wolf team up, it's a Battle Couple. Parents in Distress is the inversion, when Mama needs to be bailed out by the kids.

Examples of Mama Bear include:

Even more awesome cause this caused the underworld a collective Oh Crap moment, and immediately afterward they sent a representative to the sisters swearing that no demon will be allowed to even think of touching Wyatt without being VERY painfully dealt with, to prevent Piper from entering Mama Bear mode again.

Retrieved from "https://allthetropes.org/w/index.php?title=Mama_Bear&oldid=1970375"
Categories:
Cookies help us deliver our services. By using our services, you agree to our use of cookies.