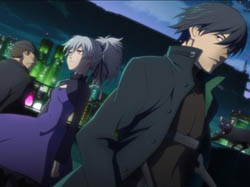 Darker than Black is a Noir Science Fiction Anime and Manga series produced by Studio BONES.

Ten years ago, an inscrutable and abnormal territory known as Hell's Gate appeared in Tokyo (as well as a corresponding Heaven's Gate in South America), altering the sky and devastating the landscape. The heavenly bodies disappeared, replaced by false stars. At the same time, people who possess various special abilities emerged. Kept secret from the masses, these individuals are known as Contractors. However, their abilities are gained at the expense of their humanity: they lack most human emotions, particularly a conscience, and thus have no overriding loyalties or aversion to killing. Various nations around the world use Contractors as spies and agents, often resulting in vicious, no-holds-barred battles for information. They're called Contractors because each has a remuneration or obeisance (called "the price" in the Funimation dub) that their "contract" compels them to perform after they use their powers and because they have no loyalties outside the scope of their current employment.

The story follows Hei, a Contractor working for the Syndicate in Tokyo, as he performs various tasks for them while trying to discover what happened to his sister Pai, who disappeared five years before the start of the series during a war fought over Heaven's Gate, a place in South America similar to Hell's Gate.

The first season, subtitled The Black Contractor, is available in some countries, on Hulu, YouTube and FUNimation's website.

A second season, subtitled Ryuusei no Gemini, roughly meaning Twins of the Meteor, ran from October to December 2009. Funimation has licensed the second season and released it in 2011.

Tropes used in Darker than Black include:

Retrieved from "https://allthetropes.org/w/index.php?title=Darker_than_Black&oldid=1963826"
Categories:
Cookies help us deliver our services. By using our services, you agree to our use of cookies.