Tokyo Is the Center of the Universe 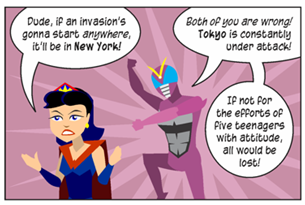 Are aliens landing in UFOs? They'll land in Tokyo.

Is a giant alien monster attacking? It's attacking Tokyo.

Is there a neighborhood full of world-class martial artists with superhuman powers? It's in Nerima-ku.

A race of giant Ultra Horrific Monsters are planning The End of the World as We Know It? Every single one of them will attack Tokyo. Oh, and guess where they store the agency to defeat them along with the Humongous Mecha?

Is there a magical door or gateway between worlds? It's in Tokyo, sort of. Well, a few kilometres off the coast, anyway.

Giant creatures from a world of data and crow warriors that can turn into jet planes? Shinjuku's got them too.

Is there a mysterious gigantic cavern hidden just beneath the Earth's surface, wherein aliens once upon a time created all life on Earth? It's at the end of the Odakyu train line.

Is there a group of five girls who each have the potential to fend off aliens who want to conquer the Earth? They go to neighbouring schools.

Is a prominent figure from religion or myth manifest once more and living in the world of Men? They're in Ueno.

An Ultimate Showdown of Ultimate Destiny? The Budokan's got front row seats.

This is not merely a Japanese Media Trope but a cliche. For some reason, Tokyo is not only a Weirdness Magnet, but a superconductive multi-million-tesla Weirdness Magnet. It's expected that things will mostly take place in Japan, since the story is created by the Japanese, but it will usually always be Tokyo. The rest of Japan barely exists and the rest of the world might as well not be there at all, because this is the City of Adventure.

This may or may not be due to the fact that Tokyo is Japan's the world's most populous metropolitan and urban area (one-quarter of Japan's population lives in the area, enough that the area is technically governed more like a county than a city) and most manga publishing houses and movie production firms are located there. Setting a story elsewhere often requires that the location be specifically relevant rather than chance. Many authors are also more familiar with Tokyo than other cities.

Koji Okada, creator of the Shin Megami Tensei series, explains Tokyo as a setting by describing it as "a city playing out the cycle of destruction and rebirth", in the historical, political and economic sense.

Interestingly, this affects the characters within the area. Being from Tokyo often gives you a generic "default" personality compared to the usual regional stereotypes. You won't see their stereotype as obviously, unless the story takes place elsewhere in the country. If it is set away from Tokyo, the city's "normal" residents will instead be meek, overworked, and stuffy—which just so happens to be the American stereotype of Japanese people in general.

In the rare cases Tokyo technically can't exist, you can substitute any of the main three locations that were historically capitals: Nara (most of the 8th Century AD), Kyoto (from the end of the 8th Century, officially to the 1860s), or Edo (Tokyo before it was renamed; the de facto capital from the 17th Century onward). SF series set when Tokyo has already met the logical outcome of this trope tend to name their new city after the old one, just with some prefix or suffix to indicate it's not the original..

Similar tendencies can be seen in American media, particularly involving Los Angeles. Entire books have been written on why fiction writers make Los Angeles a magnet for violence and natural disasters. Sometimes San Francisco. New York sometimes, especially in Marvel Comics (sometimes lampshaded that New Yorkers tend to be more used to superhero fighting than anyone else). These cities also share many similar traits with Tokyo. See Big Applesauce. Likewise, in British media London Is The Centre Of The Universe. Canadians who refer to Toronto as such, however, are being self-deprecatingly sarcastic (if they live in that area themselves) or just plain sarcastic (if they're from anywhere else in Canada).

This trope is a type of Creator Provincialism. Contrast Aliens in Cardiff.

Examples of Tokyo Is the Center of the Universe include:

Retrieved from "https://allthetropes.org/w/index.php?title=Tokyo_Is_the_Center_of_the_Universe&oldid=1896157"
Categories:
Cookies help us deliver our services. By using our services, you agree to our use of cookies.