Power At a Price 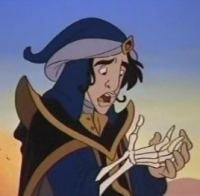 You mean magic isn't for free?

Power. The ability to influence, create, change, and even destroy. Things, places, people. It is by nature highly contentious: Some want it and would kill for it, others do not want it, or would gladly give away such a burden. Therein lies the rub. For all its force, blessings, or ability to change, power is not free... of responsibility, consequence, or cost. Some people think the exchange has to be "fair."

Drama derives vigor from the quandary of how power, seemingly free of any strings, has inherent costs. Whether they are hideous mutations, social alienation, or even death varies by story, genre, and kind of power. But the underlying basis is the same: Power at a Price.

Examples of Power At a Price include:

Retrieved from "https://allthetropes.org/w/index.php?title=Power_At_a_Price&oldid=1928937"
Categories:
Cookies help us deliver our services. By using our services, you agree to our use of cookies.