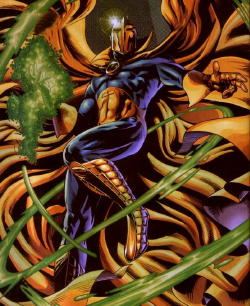 "No matter how thoroughly you think you exterminate the evil, it comes creeping back like a cockroach."

Doctor Fate is a DC Comics character. Originally created in 1940 by Gardner Fox and Howard Sherman, he's one of the icons of The Golden Age of Comic Books and a founding member of the Justice Society of America. Like fellow member Hawkman, he also has one of the screwiest backgrounds in the DC canon.

Fate is arguably the most powerful magic-wielding hero in the DC canon (discounting reality-warping demi-gods like the Spectre or power-leechers like Black Alice), and the direct counterpart to Marvel's Doctor Strange, who he predates by several decades. Dr. Fate's powers (ill-defined as they are at times) are largely derived from two objects: the Helmet of Nabu and the Amulet of Anubis. In addition, most of the users were also naturally adept at magic enough to be Flying Bricks with low-level telepathy/telekinesis.

There have been many incarnations over the years:

He's one of the few non-A-list DC characters to have appeared in four recent[when?] animated adaptations: Superman: The Animated Series, Justice League Unlimited, Batman: The Brave And The Bold, and Young Justice. Additionally, he has appeared in Smallville.

Tropes used in Doctor Fate include:

Retrieved from "https://allthetropes.org/w/index.php?title=Doctor_Fate&oldid=1846414"
Categories:
Cookies help us deliver our services. By using our services, you agree to our use of cookies.