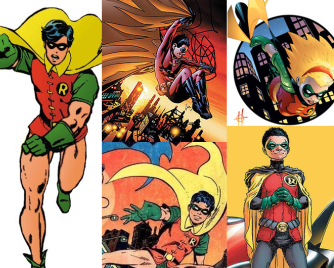 All five of the (canonical) Robins.[1] All of them have been sidekicks to the same guy[2]

You just can't keep a good character down. Even in a setting where Death Is a Slap on The Wrist, a hero can't keep his heroics up forever (nor do most want to) and even if super-villains and world-spanning disasters can't kill him, old age eventually will. But while a man can't beat the Reaper forever, the identity he holds is contained in a vessel comprising of little more than a name and a mask, meaning that if he cannot continue his Legacy, someone else can.

A Legacy Character is a character whose identity is passed down to them from an older character in the form of a title, job or persona for the newer character to assume. There are many ways this can come about:

Outside of the work, Legacy Characters are especially popular as superheroes and action heroes, or any job that involves a Secret Identity. Long Runners that span multiple generations of characters are the most likely to use them, but they can also be created as part of a back-story, such as a Secret Legacy.

Adaptations of a work with Legacy Characters to other media often only reference the current or best known holder of the legacy, only referencing other incarnations as a Mythology Gag. Younger heroes carrying the mantle often get a Rogues Gallery to match their predecessors, either via villains having kids of their own (much to the parent's chagrin), or younger villains "honoring" their own villainous legacy.

Many involve a formal moment of Passing the Torch, when the older character hands over responsibility to the younger, or a Take Up My Sword moment, if the older character dies. This is also convenient in creating change without actually fundamentally changing a title character's book. If people within the universe don't realize that there's a new man behind the mask and thus start spreading rumors he can't die, he's got Legacy Immortality.

In recent years, passing the torch to a minority character has become a popular choice.

See also Dying to Be Replaced. Compare The Nth Doctor.

Examples of Legacy Character include:

Retrieved from "https://allthetropes.org/w/index.php?title=Legacy_Character&oldid=1966115"
Categories:
Cookies help us deliver our services. By using our services, you agree to our use of cookies.