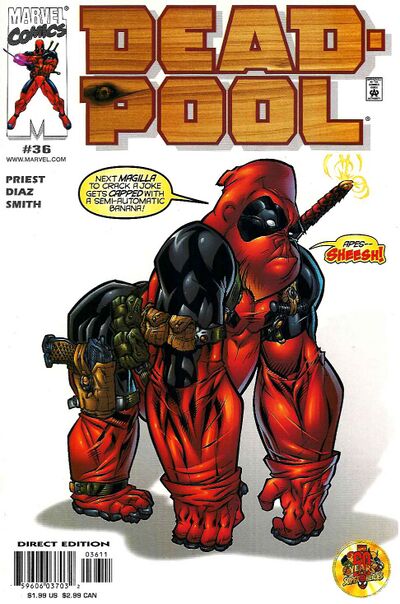 Some people find apes, monkeys, and lemurs inherently amusing. Perhaps it's the fact that they mirror humanity so closely while still maintaining the visage of a wild animal, perhaps it's just easier to anthropomorphize them, or maybe people just like poop-tossing jokes? Whatever the reason, there's a cyclic period of people being fascinated by primates that always seems to take the world of fiction by storm.

This has long been noted by comic book authors, who, during The Silver Age of Comic Books, took every opportunity to insert, turn people into, or otherwise add gorillas to a superhero story. In fact, DC Comics had a policy at the time limiting the number of "monkey" issues per month, to prevent everybody from doing it!

This is sometimes associated with the tastes of the Lowest Common Denominator, who view the ultimate form of entertainment as a cigar-smoking chimp wearing a diaper and top hat that is riding a tricycle.

A chimp with a diaper—Ha ha... Wait, we didn't imagine that until just now. Ha ha ha!

This trope is named for this Super Dickery.com subpage. And yes, we know it ought to be "Everything's Better With Non-Human Primates" too. After all, everything's also better with apes, who are technically not monkeys. The difference is actually very simple - Monkeys have tails, while apes (including chimpanzees, gorillas and orangutans) don't. On the other hand the word "monkey" is simply funnier (unless you're adressing a certain librarian...)

The actual editor of the site explains here how untrue this trope is. Speaking from personal experience, "Monkeys are not cute in real life, they are evil little bastards. On top of that, they carry the Hepatitis B virus." (And HIV came from a virus in monkeys called SIV.) In fiction, baboons are often used if Everything Is Worse With Monkeys, probably because they're on the large size for primates and are more than willing to display their formidable canine teeth on camera. Gorillas can work either way, because everybody knows gorillas are Badass, so it depends on whether the gorilla in question is good or evil.

Examples of Everything's Better with Monkeys include:

Retrieved from "https://allthetropes.org/w/index.php?title=Everything%27s_Better_with_Monkeys&oldid=1966904"
Categories:
Cookies help us deliver our services. By using our services, you agree to our use of cookies.