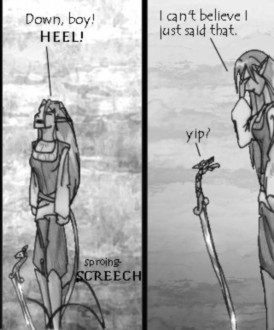 They're hard enough to deal with when they don't have a mind of their own.

Usually lacking enough personality to qualify as an actual character, the Empathic Weapon nonetheless often seems to have a mind of its own, and reacts to the feelings of the people around it. The weapon somehow acknowledges the hero's desires and good qualities, and is willing to help him out. The hero also tends to treat (and even talk to) it as if it were a person of some kind. The hero doesn't simply wield it. He will ask it for help.

Quite often, it is designed to be impossible to lose, no matter how much you wish it gone. If the villain ever does get hold of it, if it's Loyal Phlebotinum, it simply won't work because it doesn't want to. It will, however, occasionally stop working if the hero is in doubt. If it breaks, it tends to be a big deal.

A lot of Humongous Mecha fall into this category, as it seems Japanese writers love to personify machines. Compare Mons, which typically also depend on the bond with the main characters.

Beware of the Evil Weapon, its Evil Counterpart. Compare Psychoactive Powers. May also serve as an Amplifier Artifact. Empathic Weapons tend to usually be some form of Situational Sword or Evolving Weapon. May also be a Living Weapon.

If the weapon communicates actively with the characters, it is instead a Talking Weapon.

Examples of Empathic Weapon include:

Retrieved from "https://allthetropes.org/w/index.php?title=Empathic_Weapon&oldid=1857879"
Categories:
Cookies help us deliver our services. By using our services, you agree to our use of cookies.